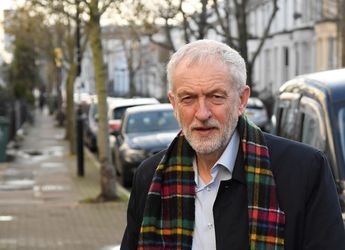 Image source : thesun.co.uk
JEREMY Corbyn has taken Labour to the brink of extinction, a furious ex-MP has warned. A dumped shadow Brexit Minister blamed the party chief for crushing election losses across its heartlands. Furious Jenny Chapman insisted the party must recuperate quickly or it could “very well be the end of the Labour movement”. Giving the Tories […]
▶ Full story on thesun.co.uk

2020 Election: Social Security Needs To Be Addressed   Who will shine a light on this vital topic for Americans?

Stories of stolen lives to be told at Liverpool Synagogue for Holocaust Memorial Day   'Stolen Lives' is an initiative to educate people about the horrors of one of the most shameful periods of European history, events...

Medicare Will Now Pay For Acupuncture In Part Due To Opioid Abuse   The Centers for Medicare & Medicaid Services (CMS) has announced that Medicare will now cover acupuncture for patients with chronic low back pain in part...

Magic Johnson Says Late NBA Commissioner David Stern Saved His Life   During those bleak days in 1991 when Johnson was diagnosed with the HIV virus, Stern threw all his support behind Johnson, inviting him to play in that...

The 8% Solution - The Easiest Retirement Plan Ever   The most successful retirement savers share one very common trait and that is that they never quit saving. Here, we explore the 8% solution, which is built on the premise that ...

This Week In Credit Card News: Paying With Your Hand; Will The New FICO System Hurt Or Help Your Credit Score?   What took place this week in the credit card and payment industries

Is Phil Mitchell leaving EastEnders?   Is this the last we'll see of the hardman?

'I was sent to Auschwitz on my wedding day - the Nazis even took my ring'   Ibolya Knill remains bright and resilient as she reflects on the devastating turn her life took - she has told her story as she always promised she...

EastEnders spoilers: Ben Mitchell reunites with Callum Highway in emotional scenes   After a couple of difficult months, Ben came to realise that everything he ever wanted was right there for the taking.

Team tries to recover bodies of US plane crew killed battling Australian wildfires   Investigators travelled to the scene where the C-130 Hercules tanker crashed in the Snowy Monaro region of New South Wales.

FC Barcelona Offer For Yan Couto Accepted By Coritiba   FC Barcelona have had their offer accepted for Brazilian U17 star Yan Couto, it has been claimed.

After Record-Setting Season, Ed Orgeron Reportedly Agrees To $42 Million Contract Extension   This is the second contract extension for Orgeron in as many years, and the deal includes an annual base salary of $6 million, one of...