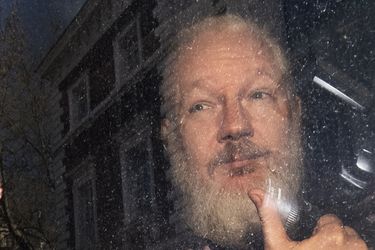 Image source : thesun.co.uk
WIKILEAKS founder Julian Assange has been blocked from seeing evidence in his extradition case, a court has heard. The Australian, 48, appeared before Westminster JPs by video-link for a hearing to extend his custody in Belmarsh jail. He is being held in the high-security jail in South East London ahead of a full hearing in […]
▶ Full story on thesun.co.uk

How to travel safe during the coronavirus outbreak, according to an expert   With the coronavirus that originated in Wuhan, China, now spreading to at least 11 countries, travelers may feel nervous. Former CDC official Dr Robert ...

Mail Online ~ 01:37 AM GMT January 25, 2020
● New book reveals the heartbreaking story of how the fates of the Foundling children were decided by a monthly lottery   PICTURE the scene – a room full of poor and desperate women picking coloured balls from a bag, with red,...

Cobbler who lost his thumb in a freak accident had his big toe amputated and sewn onto his hand   David Lee of Mansfield, Nottinghamshire, was trimming the heel of a shoe in his shop when his thumb got caught in the machine and...

Man Utd 'planning huge summer overhaul' as club initiate scout recruitment drive   Ole Gunnar Solskjaer will reportedly be given at least one more transfer window as scouts are brought in ahead of major surgery on squad this...

Small energy firms top the energy satisfaction table: But where did your supplier rank?    Octopus Energy has taken the top spot in Which?'s satisfaction survey yet again as small and medium sized energy suppliers dominate...

Fears for missing girl, 13, who vanished after leaving home in Worcester   POLICE have issued a an appeal for a missing 13-year-old girl as they say they are becoming “increasingly concerned” for her welfare. Yasmin Clark was...

Weekend Hot Topic, part 1: Most trusted video game companies   GameCentral readers reveal the game publishers and developers they trust the most… and the ones they don’t.

Metro ~ 01:01 AM GMT January 25, 2020
● WATCH: Asda 'Tarzan' caught by staff   Footage of a man climbing around the ceiling of a Black Country Asda has gone viral online.

Larry Ryan: Is more time any use to Ole?   “We are time’s subjects and time bids be gone,” wrote Shakespeare — the other one, not Craig at the King Power Stadium.

Pall hangs over Germany ahead of Auschwitz anniversary   Three-quarters of a century after death camp atrocity, rise of far-right resurrects old fears

Vancouver Island where Harry and Meghan are staying is rocked by 4.5 magnitude earthquake   THE Canadian island where Meghan Markle and Prince Harry are currently living has been hit by an earthquake. The magnitude 4.5 quake was ...

Surgeon accused of performing unnecessary shoulder operations on over 200 patients   MORE than 200 private patients of an orthopaedic surgeon have been recalled over concerns about operations he performed.Habib Rahman is alleged ...

Church of England set to help families who can't afford to pay for a loved one's send off    Public funds are provided to struggling families, but cover only the barest £1,500 service that relatives may even be barred from...