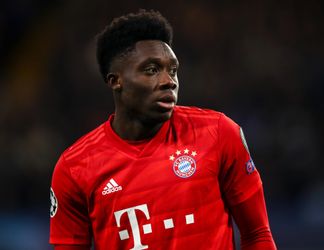 Image source : thesun.co.uk
MANCHESTER UNITED missed the chance to sign Alphonso Davies for just £2MILLION in 2017 after stalling over the transfer. The Bayern Munich left-back announced himself on the European stage on Tuesday as he helped run the show in the 3-0 win over Chelsea. Davies, 19, showed all the raw ingredients of a modern-day full-back that […]
▶ Full story on thesun.co.uk

Makambo: Yanga SC have not tabled offer to Horoya AC - Kalil   The official has stated the club might sell the player but currently, no bid has been received from Wananchi

Coronavirus in sport LIVE: Premier League 30 per cent wage dispute, Khan blames 5G towers, UFC 249 on, AJ fight date   THE PREMIER LEAGUE has been suspended indefinitely after a meeting between all 20 clubs – but when it comes...

'You have to be smart': Sagna gives Arsenal £150m Aubameyang warning   The Gunners striker has been linked with Barcelona but former right back says his old club can't allow their captain to leave

Life under Van Gaal was 'brutally difficult', says former Bayern player Baumjohann   The midfielder, now with A-League side Sydney FC, recalls his time in the Bundesliga, including an awkward first meeting with the Dutch boss.

Mail Online ~ 11:56 AM GMT April 05, 2020
● 1pm Arsenal news LIVE: Lingard and Smalling transfer targets, Coutinho £70m tag, Fraser interested in free deal   MIKEL ARTETA is plotting an overhaul at Arsenal after winning his own personal battle with coronavirus. We have...

Liverpool fans' group Spirit of Shankly to ask for an explanation over decision to furlough staff   On Saturday, the Premier League leaders joined Tottenham, Newcastle and Norwich City in putting them on furlough - although they ...

Neymar needs the professionalism of Ronaldo and Messi - Zico   The Juventus star and Barcelona talisman both "live for football", but a Brazilian legend does not think his compatriot has the same attitude

Liverpool transfer rumours rated - Klopp 'loves Lille man', Coutinho latest   Liverpool are being linked with moves for two players ahead of the summer transfer window, while Philippe Coutinho continues to be linked with a...

Prijovic 'under house arrest after breaking curfew laws' a few weeks after Luka Jovic breached rules   The 29-year-old broke strict curfew rules in Serbia by having dinner in a hotel and the incident comes a few weeks after Real ...

Man Utd chief Ed Woodward has chance to sign two fantasy transfer targets   Manchester United could have the chance to sign Cristiano Ronaldo and Gareth Bale when the transfer window reopens this summer.

'We want to replicate the Class of 92' - Man Utd youngsters 'building new foundation' at Old Trafford, says Tuanzebe   The defender is confident that the next generation of Red Devils can help to usher in a new era of success at ...

Bundesliga could return in May with 'draconian' measures, says virologist   Players would have to be kept under constant observation if play is to resume soon while fans are unlikely to see live action in grounds before 2021

Mail Online ~ 11:40 AM GMT April 05, 2020
● Coronavirus UK: Wayne Rooney questions why footballers are being targeted by government for funds   There were calls earlier this week, most notably from Matt Hancock, for players to give up a chunk of their wages, with the...

Nigel Martyn leads tributes to the two Leeds fans who were killed in Turkey 20 years ago   Sunday is the anniversary of the night when Kevin Speight and Christopher Loftus, who travelled to Istanbul to watch Leeds play...