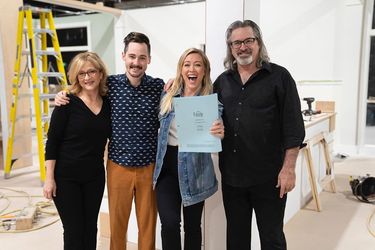 Image source : thesun.co.uk
DISNEY+’s Lizzie McGuire reboot is in peril after its show boss was fired and filming ground to a halt. The Hilary Duff-led show’s return was confirmed in August last year, with original series creator Terri Minsky back at the helm. Hilary, 32, was pictured filming scenes for the reboot in New York in October but […]
▶ Full story on thesun.co.uk

Paul O'Grady, 64, believes he has coronavirus and treating it with vinegar   Paul O'Grady has revealed he's stepping down from his BBC Radio 2 show to go into self-isolation for fear the ongoing coronavirus crisis could...

Inside Jenni Falconer's luxury home   The presenter, 44, has shown off her flair for interior design on Instagram after posting a slew of snaps from inside her home.

Lottie Moss claims she's 'found herself' during three week lockdown   The model sister of catwalk veteran Kate Moss is currently in self-quarantine at her family's sprawling country home in the Cotswolds.

Joe Wicks 'overwhelmed' by heartwarming message from boy, 10   The Body Coach star, 33, read out a special note written by his family that thanked the fitness legend for helping Rueben 'run down the stairs' again after...

Mail Online ~ 16:03 PM GMT April 09, 2020
● Chloe Ferry shows of new bikini range in series of sizzling snaps   CHLOE Ferry has embarked on yet another business venture after it was recently announced that she’s a millionaire at 24. The reality star took to Instagram to...

Kate Middleton re-wore her favourite £160 earrings   The Duchess of Cambridge might be isolating like the rest of us, but there’s no...

Anna Friel confirms Marcella has been postponed   Anna Friel has confirmed ITV have delayed airing Marcella until the autumn.

'You can go to work on an egg... if your diet is healthy'   Eating eggs is fine as long as you're not overdoing potentially dangerous foods such as red meat or processed products

Justin Timberlake says he and wife Jessica Biel are 'good' as they quarantine together in Montana   Asked if quarantine has 'helped or hindered' the relationship during a SiriusXM interview he said: 'We're doing...

Catherine Tyldesley transforms into her alter-ego Olga Keff for a hilarious social distance PSA   The Coronation Street star, 36, donned a brown wig and a drawn-on unibrow to remind fans to keep at least two metres away from...

6 wedding dress designers giving back to NHS staff and brides-to-be during coronavirus   As millions of us around the world are in lockdown due to the coronavirus pandemic, several...

Rachel Green's Style Is Still Relevant Over 25 Years Later   Revisit the best moments of Rachel Green's style on Friends. We pulled her top five looks—along with similar items that you can shop today.

Female First ~ 15:35 PM GMT April 09, 2020
● Loved Meghan Markle's luxe silky skirt? It's a total steal in Massimo Dutti's sale   It's hard to forget the day the Duke and Duchess of Sussex announced their decision to...

90 Day Fiance stars Robert and Anny announce they are expecting their first child together   The couple announced Anny's pregnancy with a sweet snap of her growing bump, along with a statement to E! News from the mom-to-be.

Liam Gallagher Twitter: Oasis star shares favourite John Lennon quote for 'trying times'   LIAM GALLAGHER took to Twitter to share an optimistic quote from one of his idols, John Lennon, amid the ongoing hardships of the...

Andy Murray and wife Kim show off tennis skills in their gorgeous garden - video   After asking his Instagram followers what they would like to see on his page, Andy Murray...