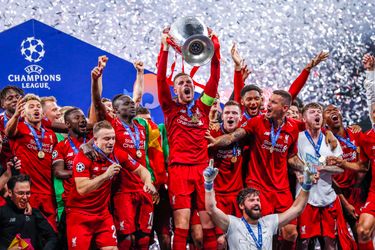 Image source : thesun.co.uk
PREMIER LEAGUE clubs may be forced to take a tougher route into the Champions League, with proposed changes to qualification for Europe’s elite tournament gathering pace. Danish champions Copenhagen have proposed a new idea to Uefa chiefs after growing frustrated with being “handicapped” by the country coefficient system. Under the current rules, countries are given […]
▶ Full story on thesun.co.uk

UFC can only collect £605m payout from ESPN this year by providing 42 live shows, including UFC 249   The UFC's controversial decision to continue putting on fights during the coronavirus pandemic is borne out of a...

Picking an African Dream Team who played in Germany   Which continental stars would make an all-time XI of Africans to have featured in German football?

Tiger Woods sued over claims his caddie shoved and injured man for taking selfie with golf legend at tournament   TIGER WOODS is being sued by a Florida man who claims the legend’s caddie caused him injury by pushing him. The...

Daily Express ~ 08:09 AM GMT April 09, 2020
● Open cancellation is no shock   Staffordshire golfer Robert Rock believes it is inevitable more European tournaments will be axed following this week’s postponement of The Open.

Pogba's treatment from Man Utd team-mates as Fernandes steals his limelight   Manchester United midfielder Paul Pogba has missed much of this season with an injury, and in his absence Bruno Fernandes has emerged as the...

Rio Ferdinand reveals why he rejected Barcelona transfer to stay at Man United   Rio Ferdinand established himself as one of the world's best defenders during his Man Utd career under Sir Alex Ferguson.

Kameko to have prep run ahead of 2000 Guineas if fixtures there   Qatar Racing's leading light is being aimed at Newmarket's big race, which the BHA hope to reschedule with the Derby after a delayed start to the Flat...

Rio Ferdinand claims he came close to Barcelona transfer after talks with Rijkaard in tunnel after Man Utd draw in 2008   MANCHESTER UNITED legend Rio Ferdinand has revealed that he was “close” to joining Barcelona in 2008 after ...

The Sun ~ 07:57 AM GMT April 09, 2020
● Oskar aiming to emulate Morgan and Max   Oskar Buur is determined to follow in the footsteps of fellow youngsters Morgan Gibbs-White and Max Kilman by becoming a regular first-team presence for Wolves.

Man Utd defender Lindelof returns to training with former club during lockdown   Victor Lindelof has been given permission by Ole Gunnar Solskjaer to keep his fitness up by training with hometown club Vasteras SK back in Sweden...

Daily Star ~ 07:56 AM GMT April 09, 2020
● West Brom attitude spot on   Head of fitness and performance Nick Davies has praised the attitude of Albion’s players as they continue to train in isolation at home.

Premier League clubs 'to be handed MILLIONS in prize money almost two months early'   In a bid to stave off the financial crisis caused by the coronavirus pandemic, an agreement has reportedly been made will which see clubs get...