The takedown of this Christian anti-abortionist is heaven sent 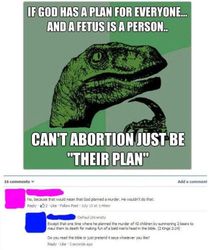 Image source : thepoke.co.uk
Leading contender for takedown of the week is this exchange about abortion which began like this. And just in case that’s tricky to read – we’re pretty sure it’s tricky to read – here it is again. ‘No, because that would mean that God planned a murder. He wouldn’t do that.’ ‘Except that one time […] The post The takedown of this Christian anti-abortionist is heaven sent appeared first onThe Poke .
▶ Full story on thepoke.co.uk

Sweden Has No Coronavirus Lockdown, But Can It Last?   In recent days international press has taken an interest in the curious case of Sweden and its relaxed approach to the coronavirus outbreak. Life on the ground in Stockholm...

Another resident dies at Scots care home as further 10 show virus symptoms   It is thought a further 10 residents at the 90-bed home are showing symptoms.

Modern society 'so afraid of death' no one asks if coronavirus measures are right, says former judge   Former Supreme Court Justice Jonathon Sumption believes that the public's 'irrational horror of death' has lead...

Mortgage Advisory group predict spike in mortgage switching applications   The volume of people applying to switch their mortgage for a better deal will increase by 20% or more over the next 4-6 weeks, according to a pfrediction ...

Covidiots rescued by RNLI after grounding catamaran while ignoring government's pleas to stay home   RNLI volunteers were forced to launch a rescue boat after two people became grounded in their catamaran in Exmouth, Devon, on...

Lord Bath of Longleat dies after contracting Covid-19   Aristocrat tested positive for Covid-19 after being admitted to hospital, his estate says * Coronavirus – latest updates * See all our coronavirus coverage The flamboyant...

The Guardian ~ 12:13 PM GMT April 05, 2020
● NHS superheroes lift spirits with dance   Our NHS superheroes have been keeping spirits up by soaring into online stardom with their dancing skills.

Express & Star ~ 12:13 PM GMT April 05, 2020
● Hunt continues for thieves who stole car while motorist was in takeaway   Investigations are continuing after a car was stolen while the driver was in a fast food takeaway.

Parents praise NHS 'heroes' in moving photo of disabled son, 4, in hospital   'As with so many families who have a disabled child, we are indebted to the NHS and reliant on its continued care and medical expertise'

Spain's coronavirus death toll rises by 674 but pace keeps slowing   The rate of new coronavirus infections and deaths in Spain slowed again on Sunday as the country, suffering from one of the world's worst outbreaks of the...

World's earliest record of the F-word is discovered in manuscript written by bored Scottish student   Scotland has the earliest use of the F-word on record. A new BBC documentary looking at the country's affinity for...

Gregg Wallace gets a little help in the kitchen from 11-month-old son, Sid   Watch out Gregg, there's a new chef in town.

Ask Larry: Is My Husband's Ex Entitled To Divorced Spousal Benefits?   Today's column addresses questions about benefits for exes and their effects, how survivor benefit amounts are determined, Medicare issues, the...