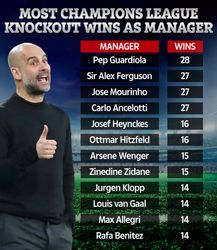 Image source : thesun.co.uk
PEP GUARDIOLA became the most successful manager in the history of the Champions League knockout stages thanks to Manchester City’s win over Real Madrid. The victory was his 28th in the latter rounds of the competition, meaning he moves out in front on his own. Going into the game, he was tied on 27 with […]
▶ Full story on thesun.co.uk

Patricia Bosworth, Actress-Turned-Author, Dies at 86   She gave up the stage for the writing life, publishing biographies of some famous friends and two powerful memoirs. She died of the coronavirus.

PL Retro: Liverpool dent Toon title hopes in thriller   Stan Collymore's 92nd-minute winner put a dent in Newcastle's title hopes as they were beaten 4-3 by Liverpool in an Anfield thriller.

Aberdeen stars and coaches take wage cut as Dave Cormack promises crisis plan   Cormack is set to make an announcement to fans on Saturday as the club looks to protect itself against the current crisis.

Coronavirus: FIFA U-17 Women's World Cup in India postponed   The recommendation to postpone activities including FIFA competitions was made by FIFA's Covid-10 working group...

Celtic set to be handed Premiership title as potential coronavirus crisis solution emerges   Celtic are set to be crowned Scottish Premiership champions after the 2019/20 season was brought to a halt due to the coronavirus...

Anthony Joshua, Tyson Fury and Deontay Wilder - where does coronavirus leave heavyweight stars?   With boxing rightly taking a step out of the ropes, a magnitude of fighters have decisions to make about their impending or any...

Report: Bulls open search for top executive   Chicago Bulls president and chief operating officer Michael Reinsdorf appears to be responding to a growing chorus of fans and critics and will hire a new executive to oversee...

Tierney: 'Mind-blowing' Arsenal star Martinelli can be world class   The 18-year-old has been a revelation for the Gunners this season, showing he can be a top striker for years to come

Albion likely to use furlough scheme   Albion employees have been told it is likely some off-field staff members will be furloughed.

Wardy's Wagers: Grand National should be today but I'm betting on virtual races   To ease the pain, ITV is screening a virtual version of the event.