Glasgow 7 La Rochelle 12: So near yet so far for Warriors 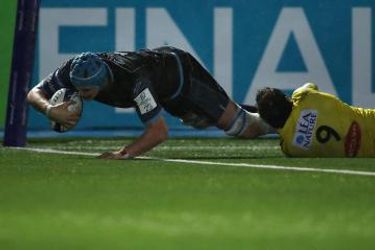 Image source : eraldscotland.com
GLASGOW’S hopes of reaching the last eight of the Champions Cup hang in the balance after a dispiriting defeat in dismal conditions last night. In the final minute of a scoreless second-half Scott Cummings thought he had scored the try which would have given Adam Hastings a conversion to win the game, but an offence by Matt Fagerson in the build-up saw the score chalked off and the No.8 shown the red card.
▶ Full story on eraldscotland.com

Nadal beats angry Kyrgios who smashes racket after walking out in Kobe Bryant jersey as Spaniard progresses to quarters   RAFAEL NADAL beat an angry Nick Kyrgios 6-3 3-6 7-6 7-6 to reach the Australian Open quarter-finals. The...

Leeds announce loan signing of Jean-Kevin Augustin from RB Leipzig   Leeds - currently second in the Championship after 28 matches - confirmed the initial loan move on Monday morning for Augustin, who completed a transfer to RB...

Injury of the week! Video reveals rugby player left with gruesome facial injury   The video, which has gone viral on the club's Twitter page with over 1,400 retweets, shows Medway's Sean Marriot drinking liquid from a...

Why did Kobe Bryant change his shirt number, and how many NBA titles did he win with the LA Lakers?   KOBE BRYANT might have been born in Philadelphia, but he was LA Lakers through and through. The NBA superstar arrived in a...

'None of it is true' - Tottenham-linked Bergwijn hits out at claims he refused to play for PSV   The Netherlands international forward has been widely linked with a move to Spurs but says he has not turned his back on the...

VAR takes 10 minutes over red card decision in Colombia debut   The VAR system had an unhappy debut in the Colombian championship (Dimayor) when it took around 10 minutes to make a key decision in the match between Millonarios...

Burnley recall striker Nahki Wells from his loan spell at QPR   Nakhi Wells joined QPR on a season-long loan in the summer and the Sky Bet Championship club want to sign the 29-year-old on a permanent basis from Burnley.

Which transfer must Man Utd complete before deadline? Starsport debate options   The January transfer window closes at 11pm on Friday night and so far struggling Manchester United have not made a single signing

Rafael Nadal comes through Nick Kyrgios test in four sets to reach Australian Open last eight   No1 seed Rafael Nadal came through his sternest test of the tournament so far as he knocked home favourite Nick Kyrgios out of the...

Tony Watt free to return to Premiership as CSKA Sofia look to end Bulgaria adventure   The former Celtic striker has been left out of the club's winter training camp.