Caroline Flack hit boyfriend with phone and accused him of cheating after finding flirty texts from woman, 60 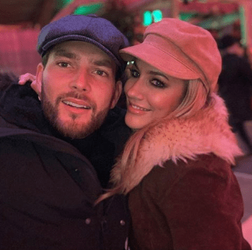 Image source : thesun.co.uk
CAROLINE Flack was arrested over a bust-up with her boyfriend ­after finding flirty texts on his phone from a woman of 60. The jealous Love Island host, 40, accused 27-year-old Lewis Burton of cheating — triggering a drunken row in which both were injured. He dialled 999 and Caroline was charged with assault after police […]
▶ Full story on thesun.co.uk

This Pic of the Friends Cast the Night Before They Filmed the Finale Will Make You Emotional   Courteney Cox posted a behind-the-scenes photo of the cast of 'Friends' before they filmed the series finale.

How Michelle Obama could shape Meghan's future   Since a secret liaison in London in 2018, the former First Lady has become a champion and friend to Meghan

Exchange rate for pound-euro after Brexit: Is the exchange rate likely to fall and should I get to my holiday money now?   If you’re heading abroad to Europe after Brexit, is it best to buy your Euros now or after 31 January...

Myleene Klass cuts an elegant figure in an oversized green checked coat   The-41-year-old, looked phenomenal when she arrived at Global Radio studios in London on Friday morning. The mum-of-three cut a chic figure in an...

SPONSORED: Xplore Dundee makes 2020 the best year for bus travel   Travelling around Dundee or to Edinburgh Airport is easier than ever, thanks to Xplore Dundee.

The best antivirus software to buy in 2020   THERE are free ways to protect your computers and mobile devices but the best antivirus suites are those you have to pay for. This is because they not only offer the highest level of...

Suranne Jones enjoys rare outing with husband Laurence Akers as they hold hands while on walk   The actress, 41, stepped out for a stroll through London with her magazine editor husband on Friday.

Surprisingly affordable versions of expensive things - CNET   Craving Apple AirPods, a Theragun G3Pro or a Peloton Bike? Here's how to get the same feels, but for way less.

The Voice UK SPOILER: Jude Law's ex Cat Cavelli impresses judges as she auditions for the show   A spoiler clip of her star turn, which will be aired during tomorrow's episode of the show, shows the mother-of-one...

Victoria Beckham cuts a chic figure in cigarette pants at her flagship store   Victoria Beckham looked suitably stylish as she 'played shop girl' at her Dover Street shop in London on Friday.

Celebs proves how different we can be online by showing off their Facebook, Instagram, LinkedIn and Tinder profiles   SOCIAL media users love jumping on a trend online – and the latest challenge is spreading fast among...