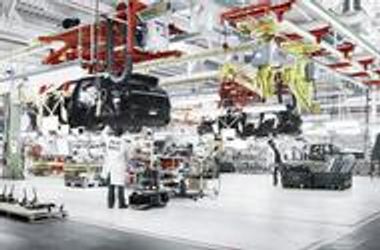 Image source : autocar.co.uk
SMMT figures for January reveal that exports now account for more than 80% of UK car production A rise in new car exports failed to stop UK car production dropping 2.1% year-on-year in January, making it the fifth successive month of decline for the industry.  Latest figures from the SMMT reveal that 118,314 new cars were built in the UK last month, compared to 120,890 in the same period last year.  Despite the drop in overall output, the number of cars built for export increased by 4.1% to 97,870, accounting for 82.7% of the UK’s total output. The SMMT attributes this uptick to rising demand in key Asian and European markets for new models from UK-based manufacturers.  The rise in overseas demand was in contrast to a sharp drop in domestic production, which was down 23.9% to 20,444 units in light of “continuing weak confidence”, according to the organisation. This was the driving factor behind last month being the worst January for UK car production in nine years.  SMMT Chief Executi
▶ Full story on autocar.co.uk

Gal Gadot reunites with her Wonder Woman 1984 cast on Zoom to celebrate Pedro Pascal's birthday   Since birthday parties or any large gatherings aren't possible due to the coronavirus outbreak, Gal Gadot took to Zoom to...

Justin Bieber dons Billie Eilish hoodie with Hailey as they label the 18-year-old singer their 'fav'   Justin Bieber took to Instagram on Thursday to share a portrait of himself and wife Hailey donning different Billie Eilish...

Singer Dami Im hits out at racist trolls who have been attacking Asians over the coronavirus   Dami Im has hit back at racists who have claimed all Asians are responsible for the current coronavirus pandemic. Dami revealed she...

Miley Cyrus shaves off beau Cody Simpson's luscious locks for a BUZZ CUT   Miley Cyrus and Cody Simpson found a fun way to keep themselves entertained as they socially isolate together. In a new Instagram video she could be seen ...

Jessica Alba on The Honest Company's donations and business approach amid COVID-19 pandemic   'With The Honest Company ... we've donated three million diapers' in addition to thousands of 'personal care products...

John Stamos praises wife Caitlyn McHugh as he shares candid snapshot of her crafting facemasks   In the post he also stressed how scarce resources are for medical workers, urging people to donate what they can while also...

Judd Apatow dons t-shirt and shorts while Leslie Mann bundles up in puffer coat on walk in LA   Apatow and Mann met when she auditioned for a role in 1996's The Cable Guy which he was producing and they tied the knot in 1997.

EastEnders, Corrie and Emmerdale fans in uproar as soaps make same huge change   Soap viewers are unsure how to handle the new schedules for EastEnders, Emmerdale, Coronation Street and Hollyoaks

Kailyn Lowry says she'll 'absolutely not' vaccinate her kids against COVID-19   The Teen Mom 2 star said she wouldn't give her children a coronavirus vaccine when it's available in 12-18 months. She hasn't vaccinated ...

Jenna Dewan coos over newborn son Callum and gives him a back rub as they snuggle up together   She welcomed her son Callum into the world four weeks ago. And Jenna Dewan cooed over the newborn in some new Insta Stories footage...

Miley Cyrus and MAC Cosmetics collaborate on $10M donations amid COVID-19 pandemic   Among the services include the delivery of food, treatment of patients and spreading awareness about medicating and treating the condition.

Jon Voight sucks on a lollipop while picking up lunch to-go at the Beverly Glen Deli in Bel-Air   Jon Voight braved the elements amid the coronavirus scare to pick up some lunch in Bel-Air on Thursday.

Prince Charles to open new NHS Nightingale Hospital for coronavirus patients   The Prince of Wales will return to royal duties on Friday, as he will open the new NHS...

Ford Puma   Ford aims to take the crossover class by storm as it revives the Puma name Given that the Puma of the late 1990s arrived with the bold tagline ‘A driver’s dream’, Ford’s decision to reprise the name of its pint-size...