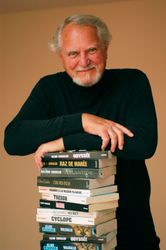 Image source : thesun.co.uk
FAMED novelist Clive Cussler — whose book Sahara was turned into a blockbuster film starring Matthew McConaughey — has died aged 88. He penned 25 books in the adventure series, including Raise the Titanic, and sold more than 100 million copies of his novels. Writing on Twitter, Cussler’s wife said: “It is with a heavy […]
▶ Full story on thesun.co.uk

The jobs available at Manchester's new G-MEX coronavirus field hospital   Applicants have been warned that the work will be "highly challenging," and "won't be suitable for everyone"

Covidiots call police asking 'can I wash my horse?' as Briton's defy government's warnings   Britons across the country are continuing to flout social distancing guidelines as the Government tries to control the coronavirus...

Coronavirus in Scotland: NHS Glasgow Louisa Jordan hospital hiring emergency workers   An emergency Glasgow hospital set up to help care for coronavirus patients in Scotland is looking to employ people who 'want to make a...

Father and son helping Scottish musicians collaborate across the world during lockdown   Musicians across the globe are continuing their love for Scottish music despite the coronavirus lockdown all thanks to Tunes in the House.

Coronavirus Update: Necessity Is The Mother Of Adaptation   Companies and customers alike are not only inventing new ways to do business but adapting to pre-existing ways that were previously untested.

NHS 'is being charged £2m-£3m a month' to use the ExCel centre as the Nightingale Hospital   Abu Dhabi National Exhibitions company, Adnec, which owns the ExCel centre in London has charged the NHS up to £3million for using the...

Sunbathing is against lockdown rules, government says   'It is not a request, it's a requirement in law, and people need to follow it.'

Daily Record ~ 08:53 AM GMT April 05, 2020
● 'It's quite unbelievable' - Matt Hancock slams sunbathers   The Health Secretary made the comment during an interview amid reports that some Brits were trying to take advantage of the weather despite the Covid-19 pandemic

Rich House, Poor House: Father battling cancer left shocked at how expensive healthy food is   Damien Lee, a wealthy father-of-two and cancer survivor from Bournemouth, is shocked to find how hard it is to afford healthy food...

FC Barcelona Search Dutch League To Sign Talents Of Tomorrow   FC Barcelona are looking to the Dutch Eredivisie for the talents of tomorrow.