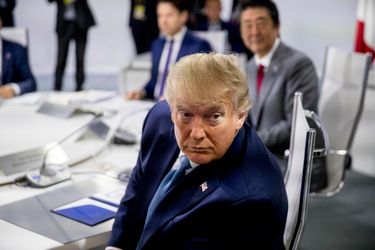 Image source : thesun.co.uk
DONALD Trump sparked a blistering row with G7 leaders after he demanded Vladimir Putin is readmitted to the club. The US President clashed with other leaders including Boris Johnson after he made the extraordinary request for Russia to be brought in from the cold. Moscow was booted out of the G8 after the 2014 invasion […]
▶ Full story on thesun.co.uk

● Anti-Putin blogger has his throat slit in a hotel room after vocally opposing the Russian President
The Sun   - 19:02 PM GMT February 08, 2020

● Anti-Putin blogger is murdered amid fears Russian hit squad is running amok in Europe
Mail Online   - 10:00 AM GMT February 08, 2020
Recent News !
● Refugees In A Brisbane Hotel Have Patchy Access To Fresh Air And No Medical Privacy: Report   Refugees detained in a Brisbane hotel are in overcrowded rooms and have limited access to exercise, says the Commonwealth Ombudsman...

Brits could finally be evacuated from coronavirus ship with 454 confirmed cases   Four Brits have already been removed from the ship after it was confirmed they had contracted the illness.

Dog rescuers rehoming pets from Romania could be bringing disease to UK   Experts are warning about the possibility of disease and behavioural risks after a rise in adoption from abroad.

Renewables barely feature in building programme for 500 schools   Solar panels, heat pumps and sustainable designs bypassed – but now one Somerset school is taking a stand It is a modernist version of a log cabin nestling in a...

ROAD TEST: Power shift for classic Toyota hybrid   Not a day seems to go by without a further announcement of a new hybrid or electric vehicle (EV), but one manufacturer that was truly ahead of the electrified curve was Toyota...

Press and Journal ~ 06:07 AM GMT February 18, 2020
● Prince Harry's mental health series with Oprah Winfrey may involve Meghan Markle, too   The Duke of Sussex announced the collaboration before he exited the British royal family and moved to Canada.

International Business Times ~ 06:05 AM GMT February 18, 2020
● Son in horror attack on own mum jailed   A son, who was the permanent carer for his mother, has been jailed for two years and eight months for launching an attack on the bed-ridden victim.

Express & Star ~ 06:05 AM GMT February 18, 2020
● Tributes paid to deputy leader   A senior councillor who has died after nearly 40 years of service to Wolverhampton has been described as a “giant of local politics”.

Express & Star ~ 06:04 AM GMT February 18, 2020
● 'A Write Card' reopens some stores   A greeting card company which went into liquidation with the loss of 120 jobs has reopened some of its branches.

BBC News ~ 06:03 AM GMT February 18, 2020
● Father jailed over road rage attack   A mysterious bout of road rage has landed a young father with no previous convictions in prison for over four years.

Express & Star ~ 06:03 AM GMT February 18, 2020
● Former teacher speaks out   A former teacher at a school has called on councillors to re-think proposals to axe an outdoor education centre.

Express & Star ~ 06:02 AM GMT February 18, 2020
● Man struck by bus died of brain injury   A pedestrian who was struck by a bus in Dudley town centre died as a result of a 'devastating brain injury', the inquest has heard.

Express & Star ~ 06:02 AM GMT February 18, 2020
● Pledge to save green belt 'realistic'   Mayor Andy Street has insisted his vision for the homes needed over the next decade to be built without touching any green belt is realistic.

The Bolton News ~ 06:01 AM GMT February 18, 2020
● Homes closer at environment centre   A controversial homes scheme alongside a popular green walkway has moved a step closer following the appointment of a contractor.