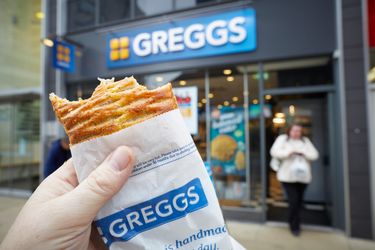 Image source : thesun.co.uk
GREGGS has confirmed that its innovation team is trying to create vegan options for all of its best selling pastries. The CEO said that vegan products were a top target because of the success of the vegan sausage roll released earlier this year. Earlier this month, the Telegraph reported that Greggs had plans for a […]
▶ Full story on thesun.co.uk

● From ham and cheese pasties to rainbow muffins - 11 items that have disappeared from Greggs stores
Chronicle Live   - 06:00 AM GMT February 15, 2020

● The chefs working behind the scenes in some of Cardiff's best-loved restaurants
WalesOnline   - 05:28 AM GMT February 16, 2020

Snag is in shape to the tune of £24 million with tights for all women   INCLUSIVITY is paying off for online hosiery brand Snag which has announced sales of £24 million since launching in spring 2018 and now holds a three...

Why the Treasury must listen to the 200 Parliamentarians who still have concerns about the loan charge - Greg Wright   When Sir Amyas Morse delivered the findings of his review into the loan charge in December, it was widely...

Another Year of Headaches for U.S. Air Travelers   Flight delays and cancellations rose again in 2019. Hawaiian, Delta and Alaska were the most punctual, while Frontier and JetBlue were laggards.

The Irish Times ~ 16:02 PM GMT February 19, 2020
● The uncomfortable truth about fake news   New research suggests that, irrespective of age, education or political allegiance, most of us are susceptible

The Sun ~ 15:53 PM GMT February 19, 2020
● Axminster Carpets collapses into administration   The 265-year-old business had been trying to secure a rescue deal for weeks.

BBC News ~ 15:50 PM GMT February 19, 2020
● Metro Bank mess looks too much for new broom to clear up   Dan Frumkin must set out how he plans to reconcile the irreconcilable

Brazil's 'last samurai' seeks to keep tradition alive in South America   From the outside, the modest home of 61-year-old Edson Suemitsu looks little different from others in this middle-class neighborhood of Curitiba, a sleepy...

The Stage ~ 15:41 PM GMT February 19, 2020
● Why is UK arguing about a matter that is already agreed?   Downing Street and Brussels in a tweet spat over future relationship

The Financial Times ~ 15:25 PM GMT February 19, 2020
● Big Tech will have to share data under EU proposals   Brussels aims to break monopolies of the likes of Google, Facebook and Amazon

The Financial Times ~ 15:23 PM GMT February 19, 2020
● EU presents new plans for AI and data as it looks to catch-up with US, China   Proposals include plan to significantly boost AI investment in Europe to over €20bn a year

E. Jean Carroll Says Elle Magazine Fired Her After Trump Rape Accusation   The longtime columnist blamed her departure from the magazine on Mr. Trump, who she said in a defamation lawsuit had damaged her reputation by calling...

Inside Sandbanks homes where waterfront mansions are on sale for up to £6million   THE exclusive Sandbanks peninsula is home to celebrities galore with properties regularly selling for millions of pounds. The Dorset waterfront...