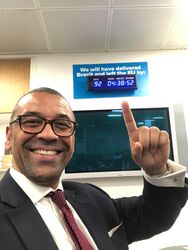 Image source : thesun.co.uk
BREXIT countdown clocks have been BANNED from No10 by Downing Street staff who say it’s too stressful. After Boris became PM a clock was seen being posted into the famous street for his office, and one has been put up in Tory HQ too. It counts down the days until BoJo has promised that Britain […]
▶ Full story on thesun.co.uk

● Downing Street distances itself from Environment Agency claims that flood-hit communities may have to be abandoned
Yorkshire Post   - 13:17 PM GMT February 25, 2020

Evening Standard ~ 22:33 PM GMT February 26, 2020
● Leonardo DiCaprio Was Pictured Giving Some Man Directions And Now I Want To Delete Google Maps From My Phone In The Off Chance That This Could Happen To Me   So generous, so caring, so giving. View Entire Post ›

Fourth Novichok assassin suspect unmasked in Salisbury spy poisoning saga   Egor Gordienko has been accused of being in 'close working contact' with the assassins who poisoned Russian ex-spy Sergei Skripal in an attack...

How George Clooney's coffee leaves a very bitter taste   Thanks partly to George, Nespresso, with its sleek machines and jewel-like pods, is the most covetable brand of the lot, accounting for 30 per cent of coffee-pod sales in...

Coronavirus threat to YOUR holiday: Millions of trips are at risk as BA cancels flights   The holiday plans of millions of Britons could be at risk after the number of coronavirus cases around the world overtook China for the...

Chelsea set for defensive overhaul as Frank Lampard makes Dayot Upamecano No.1 target   Lampard wants a new partner for Antonio Rudiger and is seeking a new left-back having seen his side handed a "reality check" by...

Mikel Arteta makes Pierre-Emerick Aubameyang declaration after Gary Neville praise   Aubameyang's double at the weekend made him the Premier League's joint-top scorer this season, having taken a share of the golden boot...

Alexandre Lacazette says Arsenal's Bukayo Saka is Premier League's best young player   Teenager Saka has been shining for Arsenal this season, and the France international believes he is the best player of his age in the top...

Body of teenage artist lay undiscovered in nature reserve for 17 days   Aldrin Lloyd Carlos was found 17 days after going missing in the Stave Hill Ecological Park in south east London and 'was severely decomposed and...

Mirror ~ 22:29 PM GMT February 26, 2020
● Teachers On Reddit Are Revealing All The Crazy Items They've Taken Away From Students And It's Hilarious   "A small (live) turtle in a kid’s hoodie." View Entire Post ›

Coronavirus spreads faster outside China, stoking global fears   The number of new coronavirus infections inside China - the source of the outbreak - was for the first time overtaken by fresh cases elsewhere on Wednesday, with...

Man City get Champions League bonus after comeback to stun Real Madrid and UEFA   Manchester City take a 2-1 advantage into their second leg with Real Madrid, who will not be able to call on Sergio Ramos

Preying On Aging Parents: The New Coronavirus Scams And What You Can Do   Coronavirus elicits fear and scammers are already exploiting this fear with fake offers to aging parents. Know what they're up to and warn your aging...

Gabriel Jesus justifies Pep Guardiola decision in best possible way on historic night   REAL MADRID 1-2 MANCHESTER CITY: Asked to play on the left flank for much of the night, Gabriel Jesus played a pivotal role as...

Rachel Riley shares photo of baby Maven on-set as she returns to Countdown   The maths whizz quipped that she could still do sums ‘post baby’.

'Amazing' son went for a sleepover at a mate's house and never came home   St Helen's 21-year-old Nathan Hayes, who suffered from epilepsy, had watched football then gone to stay at a friend's place where the lads...

Spend 24 Hours In Awesome Auckland   There’s so much to see in Auckland that you could easily spend a couple of weeks checking out the museums, learning more about Maori culture, and visiting different neighborhoods across the...

Milwaukee shooting: 'Seven dead' after gunman opens fire at MillerCoors offices   Seven people have reportedly been killed in a shooting at the MillerCoors campus in Milwaukee.

Attacker jumped from car and struck victim with 'blunt object' outside Castle Douglas pub   The victim was attacked by a passenger inside a grey car before he sped off from the scene leaving the injured man in need of urgent...