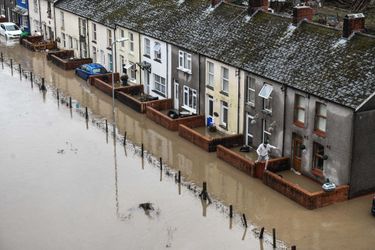 Image source : thesun.co.uk
A HOMEOWNER is facing footing the bill for £10,000 worth of damage to her home by Storm Ciara despite having insurance. Erin, from Bradford, was forced to evacuate her house for two days after the whole downstairs in her house became flooded in the bad weather, reports the Mirror. She returned to thousands of pounds […]
▶ Full story on thesun.co.uk

● Social Distancing And Storm Evacuations Save Lives - Why Some People Complain When They Do
Forbes.com   - 13:48 PM GMT April 05, 2020
Recent News !
● Stena Line to furlough 600 employees in Britain and Ireland   Ferry firm also cutting 150 jobs due to a huge decline in bookings and freight volumes

'I bought a Marks & Spencer food box and discovered exactly what's in it'   From Percy Pigs to tomato soup, these are the items and ingredients that arrived on one shopper's doorstep after she placed an order for an...

Greggs launch recipe video series to help you get your fix at home   Yes, our prayers have been answered and Greggs are sharing a series of videos of how to make your favourite Greggs treats at home. Ready, set, (steak) bake.

Demand for Luckin app surges as Chinese rush to drink up after admission of fraud   Luckin Coffee's app has rocketed to become the second most popular in China as consumers rushed to claim a free drink that it has long...

ADVERTORIAL: How to get 10% off Hotel Chocolat voucher for your Easter chocolate delivery   Bringing Easter to your front door. Stay in, and shop smart with Hotel Chocolat

EDP 24 ~ 08:02 AM GMT April 07, 2020
● The Green Room: What do you think will change as a result of the pandemic?   Meet our panel: We have given our panellists pen-names and used stock images but their biographies reflect their real career details…?????

The Stage ~ 08:00 AM GMT April 07, 2020
● Coronavirus: Property sales down 70% since lockdown, says Zoopla   Homes are still being listed for sale as people adopt a wait-and-see policy over coronavirus.

Imagination threat recedes as boardroom coup is abandoned   The immediate threat to Imagination Technologies Group’s British headquarters appeared to recede on Tuesday when its owner abandoned an emergency board meeting set up...

Man handed two on the spot fines for 240-mile round trip 'to buy bread'   Under new laws, police are now able to fine anyone outside their home without good reason, with penalties starting at £60 but rising to a maximum of £960...

FAIR FOR YOU calls for fees amnesty as Covid-19 opens up HIGH COST CREDIT traps   PEOPLE locked into high cost loans and rent-to-own schemes should be spared the extra fees charged if they fall behind with payments, says...

Oil higher as hopes build for production cut amid coronavirus threat to demand   Oil rose on Tuesday amid hope that the world's biggest producers of crude will agree to cut output as the coronavirus pandemic crushes demand,...

Universal Credit: How do claims and payments work for couples?   UNIVERSAL CREDIT can be applied for individually or as a couple. People may still apply for Universal Credit separately but there are some instances where the...

Carnival and Cruise Industry Scramble to Survive   Carnival and the other big companies have no revenue and face questions over whether customers will return once the threat of the coronavirus passes.

Asian shares cautiously gain on hopes virus is slowing, dollar slips   Asian stock markets rallied for a second day on Tuesday and riskier currencies rose, on tentative signs the coronavirus crisis may be levelling off in New...