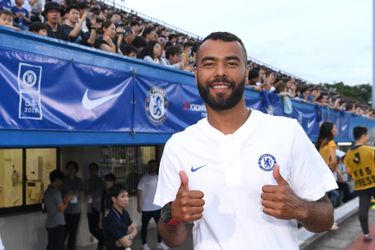 Image source : thesun.co.uk
ASHLEY COLE will reportedly be offered a coaching role at Chelsea by Frank Lampard after the left-back announced his retirement. Cole, 38, put an end to his trophy-laden 20-year career on Sunday while working as a pundit for Sky Sports. The ex-Blues full-back watched on as former team-mate Lampard made a return to Stamford Bridge, […]
▶ Full story on thesun.co.uk

Middendorp rubbishes talk of Kaizer Chiefs' title collapse   The 61-year-old mentor doesn't think the Soweto giants are bottling the title race, suggesting the league is still far from being over

Chelsea vs Man Utd betting tips: Ighalo to bag on debut but back under 2.5 goals at Stamford Bridge this evening   THE big guns return to action in a much more packed Premier League schedule this weekend. Twelve top-flight teams ...

The Sun ~ 12:38 PM GMT February 17, 2020
● All in the Game: No Moore medals for Steven Gerrard   Being marked by van Dijk, poo-gate at Hillsborough, and Sol Campbell’s memory

Real Madrid news this week: Eden Hazard looking sharp ahead of two mammoth ties at Santiago Bernabeu   Eden Hazard says he felt good on his return to action for Real Madrid against Celta Vigo in LaLiga on Sunday night.

Rangers vs Braga: Details of what happens should Thursday's Europa clash be postponed over Storm Dennis   Rangers' clash with Braga this Thursday afternoon could fall victim to Storm Dennis - but there are plans in place at...

Ashley Westwood's verdict on Burnley's recent revival   ASHLEY Westwood has praised the ‘phenomenal’ character among the Burnley squad after coming away from Southampton with three vital points.

Watch amazing moment quick-thinking referee catches kickboxer tumbling to ground after brutal knockout   A REFEREE’S quick reflexes saved a fighter from banging his head on the canvas in a Muay Thai bout in Bangkok. Sittachi...

Saul Niguez has been wowed by Liverpool but insists Atletico will exploit their weaknesses   EXCLUSIVE INTERVIEW BY PETE JENSON: Atletico Madrid midfielder Saul Niguez is a Liverpool fan. Not in the way Fernando Torres was, with ...

Jack Cullen picture special as he trains at Ricky Hatton gym   JACK Cullen is in top-tip shape ahead of his return to the Manchester Arena – as our pictures show.

Edmund: This means a lot to me   Britain's Kyle Edmund said his title-winning performance in New York "means a lot" as he surged 17 places up to No 45 in the ATP rankings.

Alexandre Lacazette warns Arsenal cannot rely on Manchester City's ban in Champions League pursuit   City were banned from Europe for the next two seasons over breaches of FFP regulations, and it could lead to a fifth place...