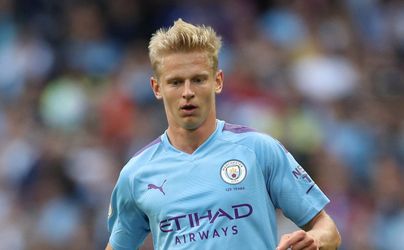 Image source : thesun.co.uk
OLEKSANDR Zinchenko’s remarkable Premier League run came to an end in Manchester City’s draw with Tottenham yesterday. Pep Guardiola must have thought his left-back was a lucky charm after he won EVERY league game he had played in. Zinchenko’s taste of victory lasted a whopping 23 matches since making his debut in December 2017. The […]
▶ Full story on thesun.co.uk

● Most of Southampton's millennials likely to make career change
Daily Echo   - 05:11 AM GMT January 15, 2020
Recent News !
● McGregor fight streaming: How to watch the Conor McGregor fight - Where can I watch?   Conor McGregor and Donald Cerrone clash at UFC 246 tonight and Express Sport is on hand with all the live streaming information.

Solskjaer: Liverpool could win treble but not among very best teams yet   The Red Devils boss has stressed Klopp's men must maintain their current high standards for far longer to be considered among the greats

Donald Cerrone thinks he can 'f**k up' UFC golden child Conor McGregor, says Joe Rogan   UFC 246 is headlined by McGregor vs Cowboy and Joe Rogan has delivered his pre-fight verdict on the mega fight in Las Vegas

Rafael Nadal responds to selfish criticism as Roger Federer also forced to defend himself   Rafael Nadal has defended himself after being slammed by Australian Open qualifier Brayden Schnur.

McGregor vs Cerrone start time: When will the UFC 246 main event start? LATEST ESTIMATES   Conor McGregor and Donald Cerrone will battle it out at UFC 246 tonight - but what time does the fight start?

Hurricanes hope to snap 3-game skid as Isles visit   It's a matter of regrouping in a variety of ways for the Carolina Hurricanes as they suffered losses of various degrees during the past week.

McGregor vs Cowboy UK start time CONFIRMED: When does UFC 246 begin and how do I watch on TV and online?   IT IS happening – Conor McGregor is returning to the UFC. After a turbulent 2019, Notorious makes his long-awaited...

A Climate Show Was Canceled. Then Came the Finger-Pointing.   One of the nation’s most successful theaters, the Public, shortened the run of a monologue by a prominent artist-activist, Josh Fox. Now each party is blaming the...

'Ole against Klopp a flyweight fighting Deontay Wilder': Ince hits out at United's lack of vision   Ole Gunnar Solskjaer knows he has a battle on his hands if Manchester United are to catch Liverpool but the challenge of beating ...

Reports: Bregman denies wearing 'stupid' devices to steal signs   In the wake of Major League Baseball's sign-stealing scandal that has cost three managers their jobs and the Houston Astros a hefty fine and bevy of draft...