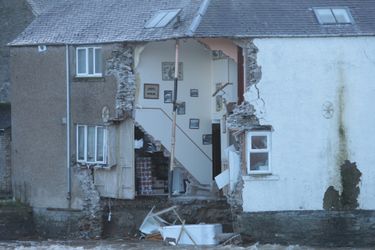 Image source : thesun.co.uk
A HOTEL has been destroyed by Storm Ciara after collapsing into flood waters amid ferocious winds. An entire wall collapsed at Sonia’s Bistro and Bridge House B&B in the Scottish Borders as it was battered by the storm. Several flood warnings were issued for the Borders and the hotel, on the banks of the River […]
▶ Full story on thesun.co.uk

Coronavirus deaths in France pass 3,000 after largest daily jump   It is the fourth country to exceed 3,000 deaths after Italy, Spain and China.

BreakingNews.ie ~ 19:11 PM GMT March 30, 2020
● These Photos Show How Shockingly Empty Airplanes And Airports Are During The Coronavirus Pandemic   It's deserted out there. View Entire Post ›

BreakingNews.ie ~ 19:07 PM GMT March 30, 2020
● Homeless and those without health insurance will be hit the hardest by coronavirus, says US professor   Dr Nirav Shah, from Stanford University’s Clinical Excellence Research Center, revealed what he made of the numbers released ...

East Kilbride's popular Tony Macaroni closes its doors amid coronavirus outbreak   The Italian eatery had been continuing with take aways but its owner has vowed to donate any surplus food to the elderly and vulnerable after it...

Death of Gold Cup-winning trainer Peter Beaumont, aged 85   Despite only having a small string of horses, it was not long before Beaumont showed he could take on the established names and win.

BreakingNews.ie ~ 19:03 PM GMT March 30, 2020
● Four members of same family including two kids found dead at village home in suspected murder   FOUR members of the same family have been found dead at their home in a quiet village. Police found the bodies of two adults, two...

Johnson & Johnson Is Already Ramping Up Production On Its $1 Billion Coronavirus Vaccine   The pharma giant aims to be ready to go to market immediately once its vaccine has been tested and approved by the FDA. Its vaccine...

Another eight die in Ireland as confirmed cases reach nearly 3,000   This is a breaking news story, more to follow...

On Equal Pay Day, What Is The Real Gender Pay Gap?   This year Equal Pay Day is March 31rst. Due to gender differences in wages, women, on average, have to work until March 31 to earn what men earned in the previous year alone...