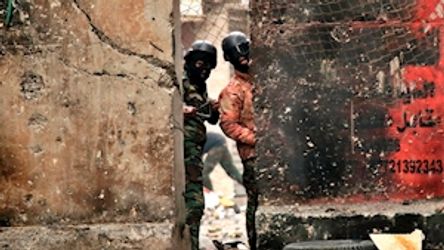 Image source : breakingnews.ie
An angry mob killed a 16-year-old and strung up the body by its feet from a traffic pole after the teenager shot and killed six people, including four anti-government protesters, Iraqi officials said.
▶ Full story on breakingnews.ie

Stormont Executive urged to act over recognition payments for the bereaved   Tina Smith, whose husband Stephen was killed by an IRA bomb in West Germany in 1989, is among a number of widows and bereaved waiting for the scheme

More than 100,000 discounted meals were eaten in Gower in three weeks   The 'Eat Out to Help Out' scheme put money in the local economy and some venues are continuing their own versions of it

Trump is pushing nationalist myths. But Democrats indulge lavish patriotism, too | Cas Mudde   Democratic politicians are constantly trying to ‘prove’ they love the US. Yet actual Americans seem more realistic about their...

You can be lord of your own manor as a piece of history goes on sale   Blackhall Manor, on Barrhead Road, has been put on the market, with one lucky buyer set to snap up a piece of Paisley history that dates back to the 1500s

Two teens arrested after 14-year-old girl knocked over and killed   Emergency services were called to Blackbrook Road, in St Helens, at about 9.50pm last night

When does Rosh Hashanah end and when is Yom Kippur 2020?   Shana Tova!

Liverpool predicted starting lineup vs Chelsea with Thiago eligible for debut   Jurgen Klopp's men look to start the new season with back-to-back wins, but face a big-spending Chelsea side hoping for a statement win as they...

David Warren Is Ready To Lead Moussaieff Into A New Era   The longtime Christie’s jewelry specialist has been named the CEO of the venerable London jewelry house. Among other things, he is keen to expand its social media...

Four people stabbed outside pub as man arrested for attempted murder   A suspect initially fled the scene but a 50-year-old man was later detained on suspicion of attempted murder.