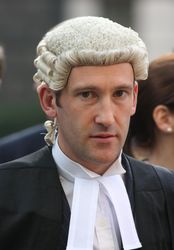 Image source : thesun.co.uk
A HERO ex-GB athlete-turned-barrister broke up fight at the murder trial of five drill rappers who killed a rival with swords. The killers who murdered their victim with huge blades were jailed for a total of 116 years as fighting broke out in court and a QC was forced to step in to prevent the […]
▶ Full story on thesun.co.uk

Alex Cobb Could Give Orioles A Lift In 2020, If He Stays Healthy   The Baltimore Orioles are hoping Alex Cobb can help their starting rotation this year after missing most of 2019 due to hip surgery.

Australia's most inked dad Brett Cross on how he became addicted to tattoos   Brett Cross, 43, who lives in Charleys Forest near New South Wales' South Coast got the name of his wife Dorothy inked on his back for the first...

Oil prices skid on demand concerns as virus spreads globally   Oil prices tumbled nearly 3% towards a one-week low on Monday as the rapid spread of the coronavirus in several countries outside China left investors fretting about ...

Shares drop, gold surges as investors scurry for safety   Global shares and oil slid on Monday while safe-haven gold surged as the spread of the coronavirus outside China darkened the outlook for world growth with infections and ...

Strictly's Karim Zeroual 'reunites with ex after she dumped him over explicit texts'   Karim Zeroual was reportedly out on his ear after it was revealed that he had sent explicit text messages to another woman but his ex has had ...

Grandmother 'knocked out' after stripper's pole snaps and he falls into audience   Stripper Lewis Riches, 32, was left in tears and fearing the worst after knocking unconscious the pensioner at For Your Eyes Only, in Shoreditch, ...

Now for the SNOW! Winter weather blows in after weeks of gales and floods   The North of England, Scotland and Northern Ireland will take the brunt of the winter weather, while further south towns will battle fresh flooding...

Estranged son of killer Rowan Baxter shows support for Hannah Clarke   Isaiah Baxter, 22, shared a photo of Brisbane's Story Bridge lit up in pink to honour Hannah Clarke, 31, who was murdered by her estranged husband Rowan...

Ten Books For The Future Of Work And An Experiment   I made a long list of books that have influenced me, over the past couple of decades, and then winnowed it to ten that are less well known and perhaps less obvious in their...

Forbes.com ~ 02:08 AM GMT February 24, 2020
● Anti-social chants bringing sour note to schools rugby   Has obsession and privilege skewed attitudes of many in private schools?

Lose up to a stone in four weeks with our new Health Journal... beginning with nutritious breakfasts   The time at which you eat breakfast affects the length of your overnight fast - and the longer you leave it, the better for...

Road signs 'put drivers at risk' because many are hidden behind overgrown trees   Transport Focus blames Highways England for the shoddy upkeep of signs on 4,300 miles of motorways and A roads. It wants drivers to report...

Global spread of coronavirus raises pandemic fears   Fears grew on Monday that the coronavirus outbreak in China will grow into a pandemic with disruptive and deadly consequences for countries around the world, after sharp rises ...