John Rankin on Andy Robertson, Sir Alex Ferguson and the problem with kids in football 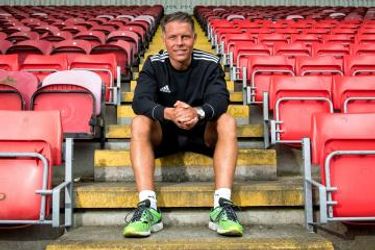 Image source : eraldscotland.com
JOHN Rankin has just finished a training session in the Broadwood gym, a glass-fronted building appended on to the side of the stadium at Clyde Football Club. It's his day off but the 36-year-old is in a hurry. He has been injured for almost nine months having broken his ankle in the penultimate league game of last season against Queen's Park and he knows his playing days are nearing their end; he was flying back then and was named in the team of the year, he says he doesn't want the lasting mem
▶ Full story on eraldscotland.com

Daily Express ~ 06:15 AM GMT February 26, 2020
● Coady: We won't rest on our laurels   Wolves captain Conor Coady insists they will not let complacency creep in as they head to Barcelona for the Europa League last-32 second-leg against Espanyol.

Daily Express ~ 06:01 AM GMT February 26, 2020
● Mick Kearns proud of 'amazing' night   Saddlers legend Mick Kearns was joined by former team-mates and hundreds of fans as they gathered to celebrate the former goalkeeper's career.

The Scourge of the Bernabeu returns as superpowers collide   Real Madrid’s clash with Manchester City was always going to be the Champions League tie of the round, but events since the draw have turned this week into a moment of ...

Healy ruled out for rest of 6N as Carbery suffers setback   It was a miserable day of injury news for Cian Healy and Joey Carbery, yesterday, as the duo suffered set-backs.

Keith Ricken rails against U20 calls   FIRST things first, Keith Ricken wants to make it abundantly clear that it is a privilege to be still involved with the Cork U20 footballers.

Aidan Smith: Deontay Wilder can dress it up any way he likes - he lost   It must go down as one of sport’s all-time-worst excuses for a defeat. After Deontay Wilder lost to Tyson Fury he said: “My management told me Saturday was ...

Brook-Smith 'ready to be made'   Kell Brook against Liam Smith is "ready to be made" as promoter Eddie Hearn weighs up whether to stage the big domestic clash or pursue world titles for the British duo.

Daily Express ~ 06:00 AM GMT February 26, 2020
● Rough guide for Espanyol excursion   Thanks to a Diogo Jota hat-trick and another Ruben Neves wonder-goal, Wolves travel to Barcelona with the hard work already done in their Europa League tie with Espanyol.

Express & Star ~ 05:58 AM GMT February 26, 2020
● More golden greats to enter Hall of Fame   Four more gold and black heroes are set to be inducted into the Wolves Hall of Fame.

LeBron outduels Zion as Lakers beat Pelicans   LeBron James had 40 points and eight rebounds in his first career meeting with Zion Williamson while leading the Los Angeles Lakers to their sixth straight victory, 118-109 over the ...

Meath not thinking of relegation, Keogan insists   Meath joint-captain Donal Keogan is not considering relegation from Division 1 despite the county failing to claim a point in their opening four games.

Allianz deal not expected to upset radical proposal   Yesterday’s announcement that Allianz has extended their sponsorship of the National Leagues to 2025 is not expected to impact on the proposal to push the football league...