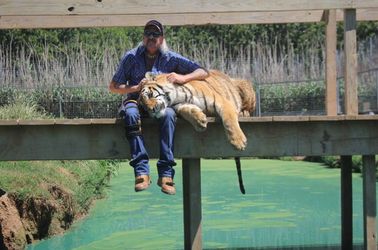 Image source : thesun.co.uk
A ZOOKEEPER who called himself “Joe Exotic” hired a hitman to kill a female rival and shot and killed five tigers. Joseph Maldonado-Passage, 56, has been sentenced to 22 years in prison after to trying to get Florida woman Carole Baskin killed on a number of separate occasions.   Maldonado-Passage shot and killed five tigers […]
▶ Full story on thesun.co.uk

Mako Vunipola set to miss Wales game but Anthony Watson could return for England   Vunipola is in Tonga for family reasons while Watson is fighting to overcome a calf problem.

British victim who knew Harvey Weinstein was a predator 20 years ago   Rowena Chiu, who was born and raised in the UK, revealed that she was one of Harvey Weinstein's victims; he had tried to rape her when she was a...

Thousands gather in Los Angeles to pay tribute to basketball star Kobe Bryant   Staples Center was sold out as 20,000 mourners remembered the NBA superstar and his 13-year-old daughter Gianna.

The Sun ~ 22:24 PM GMT February 24, 2020
● Jamie Carragher explains why Mohamed Salah remains 'under appreciated' at Liverpool   Mohamed Salah has developed at a rapid rate of knots since joining Liverpool almost three years ago

Harvey Weinstein, the A-listers he loved to party with... and a culture of fear   A Hollywood super producer who catapulted young actresses to stardom, Harvey Weinstein was rarely spotted at an awards do, premiere or party...

Stocks tumble, oil falls, gold spikes as virus fears grip markets   Stocks across the globe fell by the most since mid-2016 on Monday and oil prices tumbled as a jump in coronavirus cases outside of China drove investors to the...

Reuters ~ 22:19 PM GMT February 24, 2020
● I Would Be Completely Verklempt If You Could Identify Literally Any Of The Pussycat Dolls   I challenge you. View Entire Post ›

Fear Of The Unknown: Stocks Plunge Amid Worst Day In Two Years As Virus Spreads   Volatility and investor concern isn’t likely to be a one-day affair. This could last a few sessions, especially because people are concerned about ...

Teenage mum with four-week-old baby was 'meeting a man' before she disappeared   CCTV images of Kashalea Storm James and her tiny son Jayden have been released by the missing woman's desperate mum as she pleads for their...

Liverpool made to work by West Ham to equal Premier League record   Record-equalling Liverpool moved to within four wins of a first title in 30 years but they were made to prove their credentials in a 3-2 win over struggling...