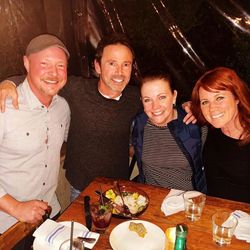 Image source : thesun.co.uk
THE cast of Sabrina The The Teenage Witch have left fans in a tizzy as they reunited 17 years after the show ended. The comedy series, which ran from 1996 to 2003, starred Melissa Joan Hart as Sabrina Spellman, a teenage girl with magical powers who lived with her kooky aunts Hilda and Zelda as […]
▶ Full story on thesun.co.uk

Luis Suarez left in limbo as Juventus confirm Barcelona outcast is no longer a transfer target due to passport issues   LUIS SUAREZ’S future is up in the air after Juventus confirmed they would NOT be signing him this summer...

MIC's Nicola Hughes flaunts her diamond in Ibiza after engagement to Charlie Tupper   The Irish beauty, 29, could not contain her glee as she dined out just days after revealing she is engaged to her boyfriend of three years

Harper Beckham is too adorable in this mini-me version of mum Victoria's dress   Monday marked digital show day for Victoria Beckham during London Fashion Week, and...

Johnny Depp rumoured to RETURN to screen in 'Fantastic Beasts spinoff series'   JOHNNY DEPP has been busy over the past few months with an ongoing legal battle against his ex-wife Amber Heard. However it looks as if he could...

Chelsea biggest flop XI in Premier League history including Kepa, Andriy Shevchenko, Veron and Tiemoue Bakayoko   KEPA ARRIZABALAGA had another afternoon to forget as Chelsea were comfortably beaten 2-0 by Liverpool on Sunday...

Queen Letizia's ravishing red dress floors royal fans   Queen Letizia has one busy schedule! Over the past few weeks, the monarch has been spotted...

Rochelle Humes' home bathroom is basically a palace   Rochelle Humes has shared a never-before-seen look inside the stunning bathroom at her new...

Marvel Studios drop the official trailer for WandaVision   WandaVision will become the first exclusive Marvel Studios series to come to Disney in late 2020, ahead of a slew of exciting new shows leading all the way into 2022.

Jodie Turner-Smith reveals husband Joshua Jackson is a 'new man' since the birth of their daughter   The actress has revealed that having a daughter in the house is not the only new development in her life since giving birth...

America Ferrera claims she was told to 'sound more Latina' at her first audition   The actress, 36, recalled the incident in a pre-recorded segment for the 72nd annual Emmy Awards on Sunday.

Sony confirms more PS5 pre-orders are on the way this week following disastrous launch day   SONY have revealed that more PlayStation 5 pre-orders will go live within days and apologised for a chaotic launch last week that left...

Sheridan Smith pleads with trolls to leave her alone   Sherdian Smith has pleaded with online trolls to 'leave her alone' after she said she wouldn't be posting pictures of her baby son on social media.

Mail Online ~ 10:46 AM GMT September 21, 2020
● Zendaya makes Emmys history and sends message of 'hope in young people'   The actress beat the likes of Olivia Colman to her Emmy win, breaking a record in the process.