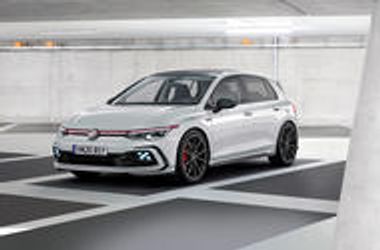 Image source : autocar.co.uk
Leaked slideshow appears to confirm power output of four hot Golfs, all making their debuts in 2020 Following yesterday's leaked image of new  Volkswagen Golf GTI 's rear-end, official power outputs of it and three more hot Golfs set to debut throughout 2020.  Set to make its official debut at the Geneva motor show  in March, the GTI follows the plug-in hybridGTE , revealed last year, and will be joined by a high performanceTCR  variant, a new dieselGTD and a range-topping R.  The slideshow - which appears to have come from a brand or dealer presentation - confirms the GTI's previously reported power output of 241bhp (converted from the kW figure). That's the same output as the GTE. It also shows a TCR variant (which may be badged something else) with an output of 296bhp.  The diesel GTD returns, too, with power upped to 197bhp, but it's the Golf R that once again heads up the range. This appears to put out 329bhp - a 33bhp increase on the outgoing car.    Followi
▶ Full story on autocar.co.uk

Charlotte Crosby and Ryan Gallagher keep their distance during an I'm A Celebrity reunion dinner   The stars from this year's season of I'm A Celebrity... Get Me Out of Here! reunited for dinner in Melbourne on Monday...

Mark Wahlberg reveals daughter Grace, 10, wouldn't dance with him at daddy and daughter event   'I didn't get one dance,' he said in an interview with Ellen DeGeneres. 'She said, 'dad, if you embarrass me, I...

Hilary Duff says Disney Plus decision to pull Love, Simon series 'sounds familiar'   The Houston native, wrote, 'Sounds familiar…,' on the post, which could refer to her highly-anticipated Lizzie McGuire revival being...

Mail Online ~ 06:58 AM GMT February 26, 2020
● Teyonah Parris screams bloody murder as in the first teasers for Jordan Peele's Candyman sequel   Written by Peele and directed by Nia DaCosta, the new installment offers a fresh take on the legend in the now-gentrified Chicago...

Jojo opens up about the extreme 500-calorie diet she was put on as an 18-year-old   16 years after rocketing to stardom as a 13-year-old singer with her hit Leave (Get Out), Jojo is opening up about an extreme diet her one-time...

Imogen Anthony hints ex Kyle Sandilands sent her flowers and messages on Valentine's Day   She split up from her long-term boyfriend Kyle Sandilands last year after eight years together.