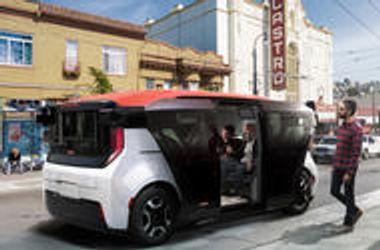 Image source : autocar.co.uk
Self-driving four-seater is set for service in San Francisco, where it could save drivers up to $5000 per year Cruise, an autonomous vehicle manufacturer owned byGeneral Motors  (GM), has unveiled an electric self-driving shuttle called the Origin. The vehicle has been designed as part of the American company's commitment “to improving life in cities” and will form the basis of a new public mobility service being rolled out in San Francisco, California.  The Origin, which is said to be capable of operating at up to motorway speed, was developed with backing from GM and financial support fromHonda . There's no steering wheel or pedals in the four-seat interior, which places an emphasis on space and comfort and features several USB ports and display screens to encourage passengers to relax or work during their journey. Additionally, the side doors slide open to minimise risk to pedestrians and make loading bicycles easier. Few technical details have been revealed, but a modular
▶ Full story on autocar.co.uk

● Open-backed NHS gowns which leave patients worried about flashing their buttocks should be scrapped
Mail Online   - 01:56 AM GMT February 25, 2020

Jonah Hill smiles alongside his gorgeous fiancee Gianna Santos as the pair make a coffee run   Actor Jonah Hill looked happy and love-struck on Tuesday afternoon, as he trailed behind his lady love Gianna Santos while the pair...

Former Married At First Sight star Jessika Power emerges from a hair salon with a fresh style    Jessika Power treated herself to a day of pampering on the Gold Coast's Surfers Paradise on Tuesday. The 27-year-old former...

Josh Duhamel, 47, and girlfriend Audra Mari, 26, hold hands as they run errands together in LA   Duhamel did the heavy lifting, gallantly carrying the shopping. He wore a khaki green t-shirt and dark gray jeans along with...

The right music can soothe your savage beast, err cat - CNET   Cat compositions could make for a more relaxing visit to the veterinarian, scientists discover.

Rebel Wilson downplays her 'outrageous' royal BAFTA jokes   Rebel Wilson has downplayed her controversial jokes about Prince Andrew and Megxit at the BAFTA Awards in London earlier this month.

No Time To Die director reveals 007 is seen after five years of being retired from MI6   A new behind-the-scenes featurette released Tuesday ahead of the 25th James Bond thriller, No Time To Die, reveals some surprising details...

Facebook to ban ads touting cures for coronavirus - CNET   The social network is trying to curb the misinformation and fearmongering surrounding the illness.

Ariel Winter goes back to fiery red hair as she leaves WeHo salon after Modern family wraps shooting   She previously rocked a red 'do before returning to the set of Modern Family in August. Her bookish character Alex has...

Kate Hudson makes sure to travel safe as she protects herself with a face mask during plane ride   Kate Hudson is taking precautions against the Coronavirus by putting on a facemask while travelling.