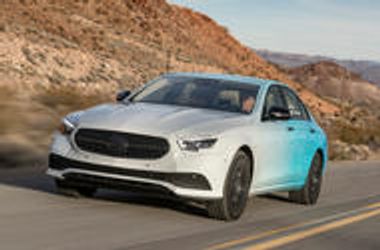 Image source : autocar.co.uk
We ride shotgun in the comprehensively redesigned E-Class executive saloon to see how it's shaping up ahead of its launch later this year “It might not look like it, but it’s one of the most comprehensive facelifts we’ve ever undertaken,” says Michael Kelz, laying his hand on the bonnet of a lightly disguised Mercedes-Benz E-Class. We’re standing in a layby not far from the pulsing neon heart of Las Vegas, where the project leader for the faceliftedE-Class is taking a break from final validation testing to run through the changes made to the new car ahead of its upcomingGeneva motor show premiere.  This fifth-generation model is a well-known quantity, having first seen UK showrooms in 2017. But behind the mild disguise – hiding subtle styling tweaks that include a wider grille, reprofiled bumpers and a reshaped bootlid – lurks what Kelz describes as literally hundreds of detailed modifications. "We’ve gone through every individual component and asked ourselves if it can be
▶ Full story on autocar.co.uk

● Middle-class parents are up in arms after it emerges most grammar schools favour poorest pupils
Mail Online   - 01:51 AM GMT February 25, 2020

Jonah Hill smiles alongside his gorgeous fiancee Gianna Santos as the pair make a coffee run   Actor Jonah Hill looked happy and love-struck on Tuesday afternoon, as he trailed behind his lady love Gianna Santos while the pair...

Former Married At First Sight star Jessika Power emerges from a hair salon with a fresh style    Jessika Power treated herself to a day of pampering on the Gold Coast's Surfers Paradise on Tuesday. The 27-year-old former...

Josh Duhamel, 47, and girlfriend Audra Mari, 26, hold hands as they run errands together in LA   Duhamel did the heavy lifting, gallantly carrying the shopping. He wore a khaki green t-shirt and dark gray jeans along with...

The right music can soothe your savage beast, err cat - CNET   Cat compositions could make for a more relaxing visit to the veterinarian, scientists discover.

Rebel Wilson downplays her 'outrageous' royal BAFTA jokes   Rebel Wilson has downplayed her controversial jokes about Prince Andrew and Megxit at the BAFTA Awards in London earlier this month.