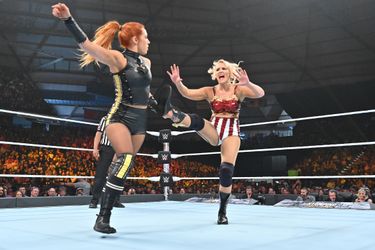 Image source : thesun.co.uk
WWE is coming to free-to-air TV from next month with an hour-long highlights show on Channel 5. Both SmackDown and Raw will be featured in weekly episodes, on Saturdays and Sundays at 10.30am from February 2. It is the first time in almost almost 20 years that the wrestling showcase has appeared on British tele […]
▶ Full story on thesun.co.uk

West Ham fans stage protest against owners in defeat at Liverpool   West Ham fans unveiled banners protesting against the club's owners during their 3-2 defeat to Liverpool on Monday night. Many want the entire board to be...

Anthony Joshua will be underdog in Tyson Fury blockbuster, admits promoter Eddie Hearn   ANTHONY JOSHUA will be the underdog against Tyson Fury when they battle to become the undisputed heavyweight champion of the world. That is ...

Naby Keita upstaged on his night to impress Liverpool and Jurgen Klopp   This was supposed to be Naby Keita's big audition to replace the injured Jordan Henderson in Liverpool's starting line-up.

Gordon Strachan suspects Rangers torpedoed their own title hopes with off the field 'madness'   The former Celtic boss thinks the storm of public eye controversies have sidetracked Steven Gerrard's side.

Richard Johnson set to return on Thursday and reignite title race with Brian Hughes   Four-time champion jockey Johnson has been out of action since suffering the injury to his right arm in a fall at Exeter on January 21.

West Ham fans leave Liverpool wondering how costly Lukasz Fabianski mistake will prove to be   West Ham fans have wanted to see a bit of fight from their team and they got that at Anfield.

Team GB play down concerns about coronavirus outbreak impacting Tokyo Olympics   DAVID COVERDALE: The outbreak of the disease has caused some qualification events to be rescheduled and moved away from China.

Laura Kenny risking Tokyo 2020 dreams by refusing surgery on broken shoulder after horror crash   LAURA KENNY vowed to win three medals in Tokyo — despite doctors saying she will not make the Olympics. Yet she admits it is a...

The eight records Liverpool could break   It looks a matter of when, not if, Liverpool lift the Premier League title - and they could become record-breakers along the way.

Liverpool boss Jurgen Klopp explains why he still fears Man City in title race   Jurgen Klopp's Liverpool side have moved 22 points clear at the top of the Premier League after coming from behind to beat West Ham 3-2 at...

Tennis Scotland deliver £12m boost to build on Murray legacy   THE Murray window is closing but Tennis Scotland appear to be diving through it just in time. Failing to adequately capitalise on the ongoing successes of Andy and...

Inter Milan and Ludogorets will play Europa League clash behind closed doors due to coronavirus   The Italian government is moving toward having other matches played without fans in affected areas but Thursday's match was...

Deontay Wilder set to trigger Tyson Fury rematch clause - as he blames ring walk costume for defeat   Deontay Wilder suffered a brutal defeat at the hands of Tyson Fury on Saturday night and is exercising his option to lock...

Deontay Wilder confirms he DOES want Tyson Fury rematch and may axe trainer who threw in towel in Las Vegas mauling   DEONTAY WILDER has confirmed that he WILL exercise his rematch clause for a summer trilogy fight with Tyson...

West Ham ratings: Jeremy Ngakia the best player as Lukasz Fabianski mistakes costs the Hammers   West Ham went close to becoming the first team to take points off Liverpool at Anfield in the Premier League this season – before...

Trent Alexander-Arnold identifies what was crucial as Liverpool mounted West Ham fightback   Liverpool came from behind to beat West Ham 3-2 on Monday night and restore their 22-point lead atop the Premier League.

Sir Mo Farah's U-turn puts heat on UK Athletics to act over 2014 L-carnitine injection    RIATH AL-SAMARRAI: It emerged in Panorama on that some UKA officials had misgivings about whether administering the legal supplement ahead ...