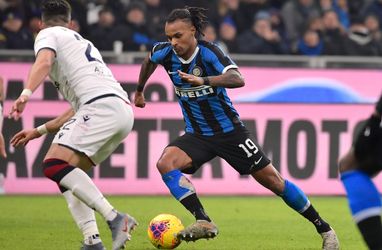 Image source : thesun.co.uk
NEWCASTLE are hopeful of landing Inter Milan’s right-winger Valentino Lazaro this month. The Serie A giants are willing to let the Austrian leave after the arrival of Ashley Young from Manchester United. Lazaro, 23, moved from Hertha Berlin last summer for £20million but has started just three league games for Antonio Conte’s side. And Magpies […]
▶ Full story on thesun.co.uk

● Juventus vs Inter Milan given permission to be played behind closed doors amid coronavirus fears
The Sun   - 08:56 AM GMT February 25, 2020

Tyson Fury predicted he would KO Deontay Wilder in 2013 sparking brilliant goading reply from American   TYSON FURY was spot on with his 2013 prediction that he would knock Deontay Wilder out in the “biggest fight of his era.” A ...

Daily Star ~ 10:09 AM GMT February 25, 2020
● Premier League transfers will soon be done via Bitcoin but experts warn it is a dangerous and unregulated   BITCOIN will be used to sign a Premier League player in the near future. That is the prediction from a major global...

Deontay Wilder handed ban from boxing - but Tyson Fury rematch still on the cards   Reports that Deontay Wilder was taken to hospital with a burst eardrum after losing to Tyson Fury have been rubbished and the Bronze Bomber is...

Jos Buttler re-energised by T20 as he looks to fulfil Test potential with England   Jos Buttler believes that variety is the spice of life and that returning to T20 cricket in South Africa this month was a "big relief" ...

Daily Express ~ 09:50 AM GMT February 25, 2020
● Liverpool 3-2 West Ham: hammers must cut out individual errors - David Moyes   West Ham boss David Moyes says his side must "cut out" individual mistakes if they are to start picking up points, after the Hammers lost...

Barcelona 'would have to pay Liverpool £225m to sign Sadio Mane due to premium'   Liverpool forward Mane scored the winning goal in the Reds' 3-2 victory over West Ham in the Premier League on Monday night.

New York knocks London off top spot as sporting capital of the world   London has been pipped by New York as the sporting centre of the world.

Bolton Wanderers boss Keith Hill's full pre-Blackpool press conference   WANDERERS are desperate for a pick-me-up and Keith Hill talks through how his players have been working hard to make that happen at Blackpool tonight.

Rangers Europa League boss curse flips as Braga fend off 'shock Ruben Amorim bid'   Sporting have reportedly made a move to make Amorim their next manager.

The Rangers stars walking a Europa League suspension tightrope ahead of Braga return leg   The Light Blues will already be without top scorer Alfredo Morelos after the striker picked up a booking in the first leg.

Kroos: Suarez tried to lure me to Liverpool in the same summer as Man Utd move was mooted   The World Cup-winning midfielder came close to making a switch to England in the summer of 2014, but he ended up heading to Real Madrid...

TEAM TALK: All you need to know ahead of tonight's match   HEAD-TO-HEAD HISTORY