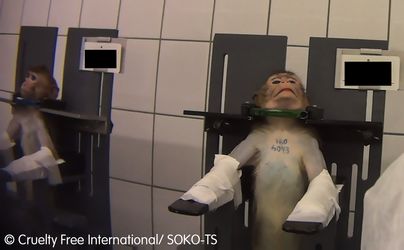 Image source : thesun.co.uk
A GERMAN lab where dogs and monkeys were injected with drugs while chained by their necks has been ordered to close. Horrifying footage filmed last year shed light on the disturbing tests being carried out at the Laboratory of Pharmacology and Toxicology (LPT) in Mienenbüttel, Germany. The controversial lab will now close permanently after having […]
▶ Full story on thesun.co.uk

How Advanced Aliens Might Harness Black Holes To Travel The Galaxy, And How We Might Detect Them   In order to journey through the universe, starships will need to travel at relativisitic speeds. This could be done with powerful ...

Forbes.com ~ 17:53 PM GMT February 20, 2020
● Smokers face fines for dropped cigarette   Smokers in a Wolverhampton are running the risk of being hit with hefty on-the-spot fines for putting cigarettes out on bins in a local high street – because it has no ashtrays.

Apps Are Taking Over Wall Street   Morgan Stanley is reshaping its business with the $13 billion acquisition of E*Trade. But the next generation of E*Trades have already scaled up a big user base through app stores, and may soon ...

Northumbria Police apologise for 'shocking delay' which led to Sunderland Snapchat pervert being freed   Police have promised to carry out a review after the case of Sunderland pervert Mark Davison took four years after a long...

EU leaders at odds over budget size   EU leaders have begun talks on a joint 2021-2027 budget that will need to fill a €75bn hole left by Britain's departure just as they face costly climate and other challenges.

BreakingNews.ie ~ 17:50 PM GMT February 20, 2020
● The Power of Putting People First   Work is always evolvingt. However there are specific moments in history that fundamentally shift the way we view the world of work as a society. These are called revolutions. We’re in the...

How much council tax is set to rise in Salford   As the budget is set for approval, the biggest change residents will see this year is a rise in their council tax

Cambridge News ~ 17:47 PM GMT February 20, 2020
● Plans rejected due to green belt concern   A Staffordshire vehicle showroom's bid to add a car wash and service workshop has been rejected after concerns about the effect on the green belt.

TDs clash over Taoiseach nominations and standoff in government formation talks   TDs have clashed on who should be the next Taoiseach as the Dáil debates candidates for the role and amid the ongoing standoff in the government...

These 5 Gold Stocks Are All Hitting New 52-Week Highs   These 5 gold mining stocks are all making new 52-week highs even if they go mostly unmentioned on the tube or in the press.

Judges urge courts to 'not shy away from maximum sentences' as they raise assault cases' jail terms   The courts should not shy away from starting at five years' imprisonment when it comes to sentencing individuals for...

BreakingNews.ie ~ 17:40 PM GMT February 20, 2020
● Cleveland Browns player Gregory Robinson arrested with 157 POUNDS of marijuana worth $750,000 in UBER on way to Mexico   AN NFL player who was a highly-touted prospect was busted by US Border Patrol agents after he was found...

Shocking cover-up behind Dark Waters chemical leaks which left cows with GREEN organs and 99% of Americans infected   WILBUR Tennant could only watch in horror as his healthy herd of cows began foaming at the mouth, their teeth...

Kobe Bryant fans flocking to wrong gravesite as mystery surrounds final resting place following change in burial plans   KOBE Bryant fans have been laying flowers and mementos at the wrong gravesite. This was revealed after an...