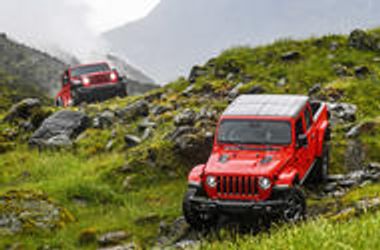 Image source : autocar.co.uk
Jeep's latest pick-up truck promises the go-anywhere ability of a Wrangler, plus the practicality and towing ability of a flat-bed. How will it cope in the wilds of New Zealand? For decades since the 1940s, Jeep made a pickup truck. And then, all of a sudden in the early 1990s, it didn't.  But nowthe new Jeep Gladiator is here to change all that.  Like a mullet (remember: business at the front, party at the back, '80s haircut fans) the Gladiator isa Wrangler for its front half, but features a chassis and body which is extended to allow a 1.5m by (nearly) 1.5m load bed at the back of it. It's a mid-size pickup (if you're in the US) and a big pickup in most other places, making it a true rival for the Toyota Hilux , Ford Ranger  and Volkswagen Amarok . Despite the lengthening to chassis and wheelbase, Jeep says the new Gladiator remains a truly exceptional off-road vehicle. To that end, then, it's most like a Ford Ranger Raptor - which has extraordinary off-r
▶ Full story on autocar.co.uk

Camila Alves steps out in an elegant and glittery low-cut gown   Camila Alves stepped out in a glittering glamorous gown at The Women's Cancer Research Fund hosts An Unforgettable Evening.

Rolls Royce Cullinan   It began a new era for the brand, but now Goodwood’s big, bold super-luxury SUV braves the road test microscope Park your indignation for a moment. The Cullinan might be yet another obscenely large and...

Buy them before we do: second-hand picks for 28 February   Quirky cars that won't break the bank is the theme for this week's picks. First on the list? A £3000 Audi A2 Our selection of affordable mould-breakers kicks off ...

GTA 6 release date: Secret in latest trailer is good news for next Grand Theft Auto   GRAND THEFT Auto fans hoping for a GTA 6 release date announcement soon could have been given a sign news from Rockstar Games is coming soon.

Daily Express ~ 06:01 AM GMT February 28, 2020
● The Temple House Vanishing: dark extremes behind disappearances from a school   Book review: Rachel Donohue has the ability to create atmosphere or ratchet up tension in a couple of beguilingly simple sentences

Mark Wahlberg is dapper in dove gray suit at LA premiere for his new film Spenser Confidential   The actor, 48, who also serves as a producer on the project, is based on the novel by Robert B. Parker. The film drops on Netflix...

Mail Online ~ 05:58 AM GMT February 28, 2020
● MAFS' Martha Kalifatidis busts out in a bikini at Sydney's Bondi Beach   She shot to fame on last year's blockbuster season of Married At First Sight.

Amanda Bynes gushes over rosy relationship with fiancé Paul Michael after recent engagement   The 33-year-old actress took to Instagram on Thursday with a clip in which she opened up on her affection for her beau to more than...

How Agro could have made a staggering $17million from a movie   Back in the eighties and nineties, Australian children tuned in every weekday morning to watch Agro's Cartoon Connection.

The Bachelor's Laura Byrne reveals the secret to her post-baby body transformation   She welcomed her daughter Marlie-Mae with fiancé Matty 'J' Johnson in June 2019.

Mail Online ~ 05:29 AM GMT February 28, 2020
● Dark Waters: A solid, old-fashioned whistleblower drama   Review: This is the kind of issue-driven cinema that used to win Oscars

The Irish Times ~ 05:00 AM GMT February 28, 2020
● True History of the Kelly Gang: How an Irish bandit became Australian antihero   Review: This tale of colonial abuse in 1880s Australia is no neat origin story for Ned Kelly

The Irish Times ~ 05:00 AM GMT February 28, 2020
● The Colour Out of Space: Take that, you art-horror whippersnappers   Review: This is the fifth film adaptation of HP Lovecraft’s short story

The Irish Times ~ 05:00 AM GMT February 28, 2020
● Those Snakes, Widowmaker - album review   The second record from Stafford metalheads Those Snakes is here, and it's a breathtaking accomplishment for the four-piece.

HMS Prince of Wales: Tickets, arrival time and location during visit to Liverpool   The aircraft carrier will arrive in the city this week