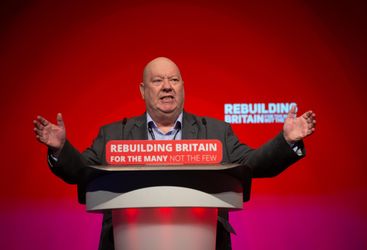 Image source : thesun.co.uk
THE Mayor of Liverpool has been arrested today on suspicion of conspiracy to commit bribery and witness intimidation. Joe Anderson, 62, was arrested by Merseyside Police along with four other men. They were arrested in connection with alleged offences of bribery and witness intimidation as part of an investigation into building and development contracts, the […] ▶ Full story on thesun.co.uk

Global rollout of 5G networks should be halted been thoroughly tested, expert claims    Professor John William Frank at the University of Edinburgh says we should 'err on the side of caution' by delaying any further...

You daily horoscope for January 19, 2021   Another day, another forecast from the stars.

Metro ~ 00:01 AM GMT January 19, 2021
● The Secret Teacher: Our belief that Leaving Cert is exemplary is at dizzying heights   A hybrid plan is no plan when it comes to school closure

The Irish Times ~ 00:00 AM GMT January 19, 2021
● Digital divide: How Covid-19 is deepening inequality in education   High-risk families who can afford private tuition at advantage over those in public system

Coronation Street spoilers: Sparks fly as teens Nina Lucas and Asha Alahan grow closer   Is this the start of a positive and happy relationship for these two?

Emmerdale newcomers Kevin Mathurin and Emile John discover they might be related   What a surprise!

EastEnders spoilers: Frankie Lewis is haunted by a tragic death but what secret is she hiding?   Will this secret change Mick's situation too?

Pregnant Laura Whitmore shows off baby bump in bath as she details 'anxious' day   The Love Island host, 35, got candid with her followers as she opened up about feeling "really anxious all day" as she detailed her...

Ana de Armas 'moving on' as she has major transformation amid Ben Affleck split   Actress Ana de Armas has shown that she is moving on from her relationship with Ben Affleck by debuting a completely new look after she has her...

DOI's Lady Leshurr speaks out on landing spot in skate-off after viewer backlash   Lady Leshurr took to the ice for the first time on Sunday night and despite scoring an impressive 25 she will be dancing in the skate-off next...

Britain now has world's highest daily Covid-19 death rate as toll nears 90,000   Oxford University research platform Our World In Data shows that the UK has a significantly higher death rate than the US, where more than 400,000...

How Sony Music Group Is Promoting Diversity Through Music Education   The National Museum of African American Music (NMAAM) officially opened its doors today during a ribbon cutting ceremony in Nashville.

Trump 'to lift COVID-19 travel bans on those flying from UK, Brazil and Europe'   The restrictions are reportedly set to end on January 26 under a new proclamation from Trump the same day that new coronavirus test requirements...

Man's skin MELTED and his muscles were charred after he was electrocuted by 14,000 VOLTS   WARNING: GRAPHIC CONTENT. Matt Manzari, now 31, was trimming trees at his church when a powerline sent a surge of electricity through the ...