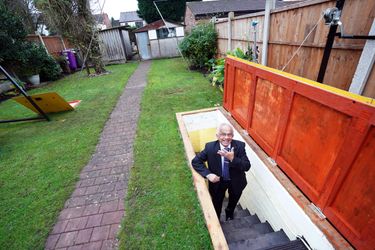 Image source : thesun.co.uk
A GRANDAD found a World War Two air raid shelter buried under his lawn. Steps to the bunker were hidden under a manhole cover. Khandu Patel, 68, made the discovery while gardening at his 1920s semi. School caretaker Mr Patel, who has lived in the Wolverhampton property with wife Usha, 62, for 40 years, said: […] ▶ Full story on thesun.co.uk

Repair shop's leather expert recalls 'emotion' in woman's eyes after restoring late husband's box   Suzie Fletcher, who was joined by Jay Blades, appeared on This Morning today and told that she takes her responsibility of...

Ministers should SCRAP the school year and force pupils to start it again, says leading head teacher   Katharine Birbalsingh, head of Michaela Community School in Wembley, believes pupils should redo the entire year when they...

'Things are getting worse': Tunisia protests rage on as latest victim named   Police brutality and unemployment worsened by the pandemic continues to drive young protesters onto streets to demand reform The latest victim of...

The Guardian ~ 13:18 PM GMT January 27, 2021
● Murder suspect denies leaving 'condom calling cards' at scene of previous crimes   Pawel Relowicz has admitted that Libby Squire was "surely vulnerable" when he claims he had sex with her on the night she disappeared,...

Holidaymakers vow to get around new quarantine rules by driving from Portugal to Spain   Boris Johnson's plans to forcibly confine travellers from 30 'high risk' countries was branded 'another omnishambles'...

IFS: More than a million self-employed missing out on Covid support   The Institute for Fiscal Studies said the way in which a self-employment support scheme has been set up means 1.5million workers are currently excluded from...

Mirror ~ 13:10 PM GMT January 27, 2021
● In his own words, Pawel Relowicz's account of the night Libby died   He has admitted Libby was 'surely vulnerable' before he says he had sex with her

Photograph of lemon shark taken in Florida shares striking resemblance with former president Trump    The sight of a prowling shark is normally a scary sight, but the fear factor was diminished when a picture was taken of one in ...

Covid England: Vaccine supply to North West 'to be cut by a THIRD'   NHS England figures reveal the region had vaccinated the second highest number of its over-80s. But well-placed NHS sources said these supplies would be cut...

14 Ways To Better Leverage AI To Connect With Consumers   Of the many ways businesses use artificial intelligence, leveraging it to connect with consumers is one that can generate great results for marketers.

How To Build Trust With Managers: 14 Tips For New Remote Employees   You're starting a new, fully remote job. How can you connect and build trust with your manager if you are never able to meet in person?

12 Essential Considerations Before Expanding Operations   Scaling and developing a business's current operation is more than just increasing its size and number of employees.

15 Top Marketing Trends To Keep An Eye On In 2021   Learn about these marketing trends before they become standard practice.

15 Must-Have Items Leaders Should Add To Their 2021 Marketing Budget   Consider these up-and-coming trends to factor into your 2021 marketing budget.

How To Maintain Product Vision As Your Company Evolves   Maintaining product vision as a North Star is crucial to helping your company stay on course as it navigates through the unexpected (yet inevitable) choppy water.

Boris Johnson accused of failings over 100,000 covid deaths on his watch   The Prime Minister was boxed in by opposition leaders in the Commons over his 'slow response' as Labour called for key workers to be vaccinated...

Kinder Morgan Added As Top 10 Energy Dividend Stock With 6.90% Yield   Kinder Morgan has been named as a Top 10 dividend paying energy stock, according to Dividend Channel

Serena Williams praises Australia's 'super strict' quarantine system while other players complain   The 39-year-old is currently quarantining in Adelaide with her three-year-old daughter, Olympia, ahead of the Australian Open...

Mail Online ~ 13:06 PM GMT January 27, 2021
● JoJo Siwa's comeback to parent whose kid won't watch her again after coming out   JoJo Siwa has defended herself against homophobic critics after she publicly came out last week by wearing a t-shirt that said 'best gay...

Trio get Covid fines after being rescued from abandoned Thames Estuary forts   The trio - one of whom had come all the way from Manchester - visited the WWII-era Red Sands Forts near Whitstable and ended up being stuck there...

Liverpool Echo ~ 13:03 PM GMT January 27, 2021
● Orange appeal: 17 mouth-watering ways with marmalade   From cake to pudding to panna cotta to pork ribs, this seasonal treat is endlessly flexible. And let’s not forget the cocktails … We may never know how many surplus jars of...