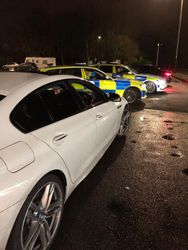 Image source : thesun.co.uk
A RECKLESS driver faces 107 penalty points after setting off 32 speed cameras when he tore along a motorway in heavy fog. His white 7 Series BMW was caught doing an average of 83mph. He sped through roadworks — which had a 60mph limit — and was snapped by a succession of cameras on the […] ▶ Full story on thesun.co.uk

What Kamala Harris Means For The Next Generation Of Leaders   Representation matters, because it helps break down stereotypes and biases about what a leader looks like, and seeing different types of leaders helps pave the way...

New drug could stop people from catching Covid-19 after protecting care homes   In the study of care home staff and residents, scientists infused them with artificial antibodies in a bid to provide a temporary boost to immunity...

Jurgen Klopp lifts lid on Alisson's reaction to controversial penalty   The Brazilian was adjudged to have brought Asjley Barnes down in the box, as Burnley inflicted Liverpool's first Anfield defeat since 2017 on another...

Wintery weather to cover UK as temperatures plummet to -10 across Britain   As thousands continue to pick up the pieces from the relentless rainfall of the last few days a weather warning for ice remains in place for large parts ...

Mirror ~ 05:28 AM GMT January 22, 2021
● Cardi B Jokingly Wanted To Perform "WAP" At The Presidential Inauguration, And I Could See It Now   We need to collect signatures for this. View Entire Post ›

Saweetie Knew Quavo "Loved" Her When He Saved Her His "Last Piece Of Chicken"   “The Bentley is cool but I’m really into intimacy." View Entire Post ›

Brexit: Ian McConnell: Tory post-Brexit agenda starts to crystallise in alarming ways   THE cat, as shadow business secretary Ed Miliband put it, is now out of the bag on the Conservatives’ plans to look at scrapping some...

A full-on Zero Covid-19 strategy is unlikely, but Irish hybrid a possibility   Businesses must prepare for lengthy period of restrictions and tightened border rules

Covid: Everything you need to know this Friday morning   The North-East and Yorkshire is set to see its Covid vaccine supply significantly reduced from next week while other regions 'catch up'. Here's the latest...

Tributes to the Bolton scientist and lecturer Dr Arthur Jones   Tributes have poured in for the popular lecturer, science researcher and theologian Dr Arthur John Jones, who died at Bolton Hospital on January 3, 2021.

Octagon chosen as partner to bring a new virtual modern adaptation of The Picture of Dorian Gray to audiences   THE Octagon Theatre will be bringing a new gripping adaptation of an Oscar Wilde classic to Bolton audiences.

Coronavirus cases in each area of Bolton revealed   CORONAVIRUS cases remained consistently high across the borough in recent weeks.

Plans for 45 new affordable homes on green land submitted   45 new homes could be built in Bolton if plans are given the green light.

WOMAN saved car from burglar theft   A WOMAN saved her car from being stolen after spotting the thief sat in the vehicle outside her home.

Horwich Town Council asks for review on whether it should be in Bolton   A TOWN council is exploring the idea of cutting ties with Bolton Council?.

The future looks sweet for new business owner Amy   A MUM-OF-TWO has taken her first steps into entrepreneurship to launch her own party business during the months of lockdown.

Glasgow flat for sale in Garnethill   GARNETHILL has a real sense of community despite its city centre location - which makes it a draw for any buyer.

Dr Punam Krishan: Busting harmful Covid vaccine myths targetting Bame community   OVER the past few weeks, I have personally received countless videos, stories and “fake news” items regarding the Covid vaccine that have been...