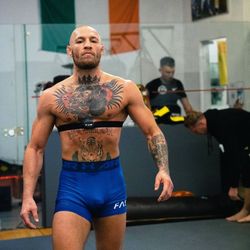 Image source : thesun.co.uk
CONOR MCGREGOR has posted three cryptic tweets believed to be targeted at fierce UFC rival Khabib Nurmagomedov. The retired Russian confirmed he will be in the stands to watch the Notorious take on Dustin Poirier at UFC 257 next month. McGregor and Khabib have an ongoing feud that exploded in their scrap over two years […] ▶ Full story on thesun.co.uk

● Conor McGregor talks up possibility of his three-year-old son becoming UFC fighter ahead of bout with Dustin Poirier
The Sun   - 12:47 PM GMT January 18, 2021

Frank Lampard plays down Timo Werner-Fernando Torres comparisons   The £53m German striker is without a Premier League goal for the Blues since November 7, and missed a gilt-edged chance to end his drought late on at Fulham on...

Fernandes sends message to Man Utd fans after frustrated reaction to subbing   United missed the opportunity to extend their lead over an injury-hit Liverpool and were forced to settle for a point with talisman Fernandes not...

Manchester United 'confident' Van de Beek will make the grade at Old Trafford, claims Van der Sar   The Ajax chief executive has offered an insight into how the midfielder is progressing behind the scenes in Ole Gunnar...

Chelsea XI vs Leicester: Confirmed team news, predicted lineup, injury latest for Premier League game   N’Golo Kante has been ruled out of Chelsea ’s clash with Leicester after failing to recover from a hamstring injury.

Furious Neil Lennon insists Celtic broke no rules as he hits out at criticism   The Parkhead boss has been incensed by the coverage the mid-season break has received as he took aim at media, pundits and the government.

Jamie Carragher fumed in Liverpool vs Man Utd at rule which will cause injuries   Manchester United were caught offside eight times during their goalless Premier League draw with Liverpool, though the linesmen often delayed...

Shrewsbury boss Steve Cotterill to watch postponed Southampton clash from a hospital bed   The former Birmingham City manager, 56, tested positive for the disease last week and on Friday was admitted to hospital near his family...

Conor McGregor shows off dazzling £740,000 'night-sky' watch made with a 288-facet diamond   McGregor posted a picture of the watch, which represents the night sky, to his 38.3million followers on Instagram ahead of his...

John Stones on cusp of England recall for March's World Cup qualifying triple-header ahead of Euros   John Stones has been absent from the England set-up for 14 months, having last played for the Three Lions back in November...

'Chelsea came in, so did Liverpool' - Walcott reveals deciding factor in Arsenal move   The former England international says he fielded offers from two of the Gunners' main Premier League rivals during his first spell at...

Henderson baffled by Shaw and Solskjaer claims on Liverpool stalemate   Manchester United players and manager felt disappointed with a 0-0 draw at Anfield, much to Henderson's surprise

Rangers see off European giants to top global power rankings   ESPN have put the Glasgow side ahead of some of the European superpowers after their unbeaten Premiership campaign.

Celtic rocked by fresh Covid blow as star tests positive during self isolation   Parkhead boss Neil Lennon and a number of his quarantined players returned to the club's Lennoxtown base on Monday after their isolation period ...

Erling Haaland's love for Frank Lampard surfaces as Chelsea prepare record move   Borussia Dortmund striker Erling Haaland has been linked with a summer move to Chelsea and footage has resurfaced of the forward expressing his...

Danny Drinkwater completes loan move to Turkey's Kasimpasa from Chelsea   * Midfielder transfers to Turkish club until end of the season * Player not involved with first team under Frank LampardDanny Drinkwater has a chance to...

Tokyo 2020 willing to permit only 6,000 athletes to attend Opening and Closing Ceremonies   The Olympics, scheduled to take place this summer having been postponed last year due to the pandemic, will be 'simpler and more...

Alan Smith column: Kieran Tierney return a huge boost for Arsenal after no-show   If fatigue played a part in Arsenal 's disappointing display against Crystal Palace on Thursday, as Mikel Arteta claimed, he must be hoping...

Chennaiyin vs East Bengal LIVE: Follow ISL clash in real time   The Marina Machans and the Red and Golds had played out an exciting 2-2 draw the last time they met....

Paris Saint-Germain in for Lionel Messi transfer confirms sporting director   The Argentine superstar could leave Barcelona on a free transfer in the summer with Manchester City also keen.