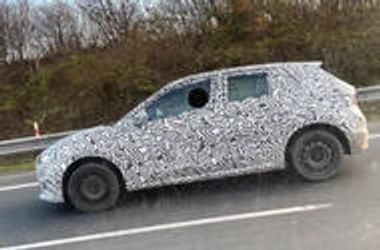 Image source : autocar.co.uk
Supermini's move to MQB will bring improvements all round – but no electrification yet Skoda will finally bring its ever-popular Fabia supermini back into line with itsVolkswagen Group siblings with an all-new version next year, and an early sighting of a prototype has given us our first look at its new look Images captured by Czech site portál ridi?e show a development mule undergoing testing on public roads, which - despite heavy camouflage - can be seen to take styling cues from newer Skoda models including the Octavia and Scala. The rear end, especially, looks to have been brought into line with the Czech maker's other models with a thicker bumper and a flat panel between the reshaped brake lights, which will likely bear the model's name.  Images of the side and front of the car are less clear, so it is difficult to make out much of the car's overall design, but we're expecting a greater leap than the Fabia made between its second and third generations.  Pla ▶ Full story on autocar.co.uk

Mrs Hinch's fans convinced her house is haunted following nursery tour   Is Mrs Hinch's house haunted? That was the question many fans were left wondering when...

The Sun ~ 15:55 PM GMT January 24, 2021
● Review - Lexus ES F Sport is pleasing-on-the-eye saloon doesn't cost the earth   Mirror Motoring's Andy Gilpin was never going to go hell for leather in this £38,000 saloon that turned heads in the most challenging of places

Ogier storms to Monte Carlo World Rally win   Frenchman secures a record-breaking eighth win at the Monte Carlo rally Sebastian Ogier emerged victorious from the treacherous conditions on the Rallye Monte Carlo, getting his and...

JoJo Siwa Confirms She's a Member of the LGBTQ+ Community: 'I'm the Happiest I've Ever Been'   Twitter is emotional over Siwa's impactful statements.

Montana Brown PICTURE EXCLUSIVE: Love Island star enjoys a stroll on the beach with new mystery man   The former Love Island star, 24, put on a cosy display with the beau as they were seen wrapping their arms around each other.

FIFA 21 Team of the Year kit release date live: TOTY celebrations continue with NEW strip   FIFA 21 fans can celebrate the release of the Team of the Year players with a brand new blue and gold strip.

The Serpent cast: Who stars in the BBC serial killer drama?   THE Serpent is back on BBC One tonight (January 24) for episode 5. The crime drama mini-series is also set to drop on Netflix and is based on the 1976 arrest of the...

Alex Jones transforms home to celebrate son Teddy's birthday   It's been a special weekend for Alex Jones and her family – and we're not...

Mail Online ~ 15:00 PM GMT January 24, 2021
● Foggy nights, burnt out cars and scrappy marshland: Billy Bragg's ode to the romantic, lawless landscapes of Essex   It had the biggest fishing fleet in the country, the largest gasworks in the world – and wastelands full of...

James Argent is put through his paces on a gruelling assault course   Doctors have warned the affable TV personality that he could die if he doesn't take immediate action after his fluctuating weight ballooned to 26 stone...

When is the first Dancing on Ice 2021 elimination?   DANCING On Ice has begun with a dramatic first episode. Crowd favourite Lady Leshurr came last in her first debut on ice — but she will face the prospect of elimination in...

Eamonn Holmes thrills fans with unseen family photo for special occasion   Eamonn Holmes posted a sweet family tribute on Instagram at the weekend. Taking to the...

Roxy Jacenko reveals whether she plans to have any more children     Roxy Jacenko invited her fans to ask her anything they liked in an Instagram Q+A session on Sunday.

Bachelor in Paradise's Ciarran Stott says he still receives death threats   The 27-year-old confessed that he's still on the receiving end of abuse, months after his villain edit on last year's season of Bachelor in...

Holly Willoughby looks radiant in a fresh-faced selfie as she makes the most of Britain's blizzard   The presenter, 39, looked radiant as she appeared to go make-up free, with her signature blonde locks falling loose over her...