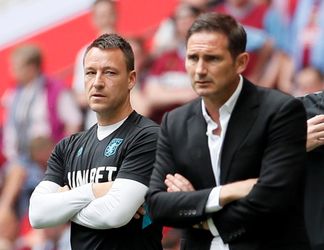 Image source : thesun.co.uk
FRANK LAMPARD reckons Derby and John Terry would make a great match. Lampard’s former Chelsea team-mate is now a first team coach at Aston Villa.  But he is also one of the favourites to take over the Championship’s bottom club. And Chelsea boss Lampard said: “John is destined to be a manager.  “He has been […] ▶ Full story on thesun.co.uk

Bruno Fernandes has furious outburst at Solskjaer in Man Utd's draw at Liverpool   Bruno Fernandes was left furious when he was subbed off in Manchester United's 0-0 draw against Liverpool at Anfield, yelling at Ole Gunnar...

Man Utd verdict: Red Devils have nothing to apologise for after grinding out draw vs Liverpool to stay top   HAVE no doubt Ole Gunnar Solskjaer will have left Anfield very happy with this. Because it is Manchester United you...

Man Utd drawing with Liverpool shows Ole Gunnar Solskjaer has key weakness he must fix   Manchester United need to improve a key area of the pitch to become genuine contenders for major honours.

Liverpool vs Man Utd winners and losers as derby ends in 0-0 draw   Liverpool's game against Manchester United ended in a 0-0 draw, with neither side managing to find the back of the net in the highly anticipated derby game

Chan 2021: Uganda aim to beat Rwanda despite emotional attachment - McKinstry   The Cranes coach believe more than just three points are at stake when they face their local rivals in their opener

Liverpool player ratings vs Man Utd: Alisson saves Reds as Firmino struggles   Liverpool failed to climb back to the top of the Premier League after drawing with title rivals Manchester United.

Jose Mourinho heaps praise on 'magnificent' Tanguy Ndombele for turning around his Tottenham career   Spurs' record signing seemed set for the exit door when Mourinho arrived at the club after struggling to adapt to the...

Eddie Howe to Celtic rumour just will not go away   Speculation is rife over the 43-year-old coach and it's certainly a rumour which has captured the imagination of a support desperate for major change at Parkhead.

Harry Kane insists Jose Mourinho does NOT tell Tottenham to sit back and says it comes from players   Spurs have been pegged back three times recently, going 1-0 up against Crystal Palace, Wolves and Fulham only to draw 1-1...

What FIFA laws say about added time after Liverpool fume at half-time whistle   Liverpool were left furious that referee Paul Tierney ended the first half of their Premier League with Manchester United 10 seconds earlier than...

Racing tips: This 16-1 Ayr outsider can spring a shock for punters and best bets from Wolverhampton all-weather card   SUN Racing is back to give you some insight on big horses at even bigger prices in today’s meetings. Here, we ...

Mesut Ozil signs for Fenerbahce as his seven-and-a-half years at Arsenal finally ends   The 32-year-old German World Cup winner, who had not featured for Arsenal since March 7, moves to Turkey after his £350,000-a-week Gunners...

Liverpool fans fume at referee for controversial half-time whistle vs Man Utd   Liverpool were incensed that referee Paul Tierney called time on the first-half five seconds early as Sadio Mane raced through over the top against...

'Take the game to Liverpool!': Micah Richards savages Man United for 'negative' first-half tactics   The Sky Sports pundit claimed Ole Gunnar Solskjaer's side will not win the title if they play as negatively as they did in...

Horse racing tips: Templegate reckons this three-time bumper winner can make it a perfect four at Lingfield on Monday   BANG-IN-FORM Templegate returns with his best bets for Monday’s action. Read on to see who our red-hot...

Bayern Munich chief Karl-Heinz Rummenigge admits Pep Guardiola left him in tears when he left   Rummenigge divulged that he will 'always remember' the night when Guardiola told him he was leaving for a new challenge,...

Dana White reveals Khabib Nurmagomedov is no longer interested in fighting Georges St-Pierre   UFC legend St-Pierre recently claimed that he was excited by the prospect of a showdown with Nurmagomedov, but admitted he may not...