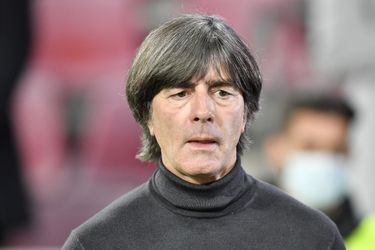 Image source : thesun.co.uk
GERMANY have given under-fire Joachim Low a public vote of confidence – and confirmed he will lead his country into Euro 2020. World Cup winner Low faced growing calls for his dismissal after Germany’s 6-0 Nations League humiliation in Spain earlier this month. Low has become embroiled in controversy ever since Germany’s group stage exit […] ▶ Full story on thesun.co.uk

Lippert: I don't know Ghana's football identity    The German talks about his work so far at the football association

The Sun ~ 06:08 AM GMT January 20, 2021
● Seán Moran: Improvisation may be on the cards again for fixture makers   GAA will face huge decision if pandemic prevents any action until April

The Irish Times ~ 06:00 AM GMT January 20, 2021
● Shane Lowry well aware that silence can be golden at times   Irish star gets season under way at Abu Dhabi Championship this week

Lewis Stevenson can be Hibs history maker as he aims for fourth trophy   No Hibs player has a similar medal haul since the heady days of the Famous Five in the 1940s and 50s.

Scott Brown slams Neil Lennon's Celtic critics over short memories   The quadruple Treble winning midfielder reckons people should consider what his manager has achieved over his Hoops career before sniping from the sidelines.

Celtic were brilliant with me but I just felt like a number, says EK's McGrath   Kieran McGrath revealed that he turned down a trial with Fleetwood to join East Kilbride after loving his time on loan

'If Fury needs prep for AJ's power then spar me!'   Raphael Akpejiori says his "devastating" power would make him an ideal sparring partner for Tyson Fury, who is planning a world title fight with Anthony Joshua.

Trump vs Biden - What will a new President mean for US sport?   On the day of Joe Biden's inauguration as the 46th President of the United States, Sky Sports examines Donald Trump's sporting legacy and looks at what the...

Frank Lampard 'worried' over Chelsea slump after being quizzed over Blues future   Chelsea boss Frank Lampard is under mounting pressure at Stamford Bridge after another defeat which leaves the Blues eighth in the Premier League ...

Chelsea next manager: Four candidates who could replace Frank Lampard   Chelsea manager Frank Lampard is under huge pressure and is facing the sack.

David Alaba to Liverpool: Jurgen Klopp told date transfer decision will be made   David Alaba is set to leave Bayern Munich at the end of the season with his contract expiring.

Five Chelsea players under threat if Andriy Shevchenko replaces Frank Lampard as manager   Frank Lampard is under serious pressure at Chelsea following the 2-0 defeat to Leicester on Tuesday.

Why Bolton Wanderers have plenty of work to do in second half of the season   WANDERERS' season has reached the halfway stage - and very little has gone according to plan.

Burnley boss Sean Dyche confident strikers will come good   SEAN Dyche is certain his misfiring forward line will click again soon even if it takes a lucky goal to get them back up and running.

Best of the West: Rob Roy captain Scott Walker ready for leap into unknown   Context is everything with the WOSFL’s inaugural season and never more so than when there’s a great unknown to the current state of affairs.

Ayrshire fighter Calvin McCord on his lockdown training   MENTAL health experts would probably give it a fancy title like expressive group therapy. For Calvin McCord, however, it is just old-fashioned mickey-taking.