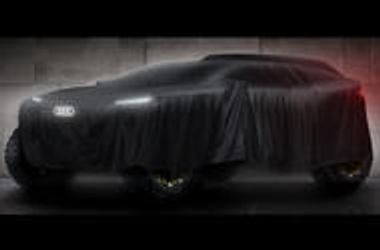 Image source : autocar.co.uk
Firm will replace Formula E efforts with entries into notorious Dakar event and new Le Mans hypercar class Audi will end its Formula E campaign after the 2021 season to make its landmark return to the world of rallying with an entry into the 2022Dakar Rally .   Technical details of the new Dakar racer remain under wraps, as does most of its final design, but it will take its power from an electric motor mated to a high-voltage battery, with a turbocharged petrol engine serving as a "highly efficient energy converter".  In essence, the combustion engine will act as a range-extender device, topping up the battery pack as required while the race is in progress. Audi claims it will be the first "viable alternative-drive concept" fielded in the 42-year-old competition. The 2022 rally will mark the first time that a factory Audi team has competed off-road since Walter Röhrl claimed victory at the 1987 Pikes Peak International Hill Climb in a Quattro S1 E2 . In line with ▶ Full story on autocar.co.uk

From Devon to Suffolk, book your staycation now with one of our self-catering breaks   FANCY escaping on a staycation with the kids this summer? It may be worth booking now as firms are reporting high demand for the peak school...

The Sun ~ 22:19 PM GMT January 23, 2021
● Kimberley Garner sets pulses racing in a plunging lilac bikini during beach day in Miami   The former Made In Chelsea star, 29, posed at the beach bar in her revealing purple two-piece as she frolicked with her male companion.

Who is Larry King Jr and is he married?   LARRY King Jr is the son of the late radio and television icon Larry King, although King had no idea he had a son for many years. Larry King had five children over the course of...

Justin Bieber reflects on 'confused and angry' time when he was arrested for DUI seven years ago   On Saturday, the 26-year-old singer-songwriter shared a snap to his Instagram story showing him getting on a light green-blue...

Kate Moss jets into curfewed Paris for 47th birthday weekend at £2,500-per-night Ritz   Supermodel Kate Moss had to travel to Paris work, cutting her Caribbeam holiday short. But she still made the most of her time in the city...

All-electric Ford Mustang Mach-E delivers fuss-free power and a touch of glamour   “A ROSE by any other name,” wrote Shakespeare, “would smell as sweet.” Whatever we call the flower doesn’t affect how it smells. And whatever we...

Tom Jones: The Voice judge's controversial love life and children revealed   The Voice judge Tom Jones has been in the public eye for over 50 years with an...

Bernie Sanders Released an Inauguration Meme Sweatshirt and It's Already Sold Out   The Vermont senator is using the viral moment to help people.

EastEnders' Natalie Cassidy pleads with shoppers to 'stop leaning over her' amid COVID-restrictions   The EastEnders star, 37, took to Instagram on Thursday to remind fans to 'be patient' when picking up their essentials ...

James 'Arg' Argent, 33, shares throwback photo amid 26 stone weight battle   The former TOWIE star, 33, uploaded a snap on Saturday as he said he hopes to 'get back to my very best' after battling an eating disorder for...

Sharon Osbourne wants to be first to own flying car so she can snoop on people   General Motors unveiled plans for a futuristic flying one-seater Cadillac in an animated film earlier this month and TV star wants to be the first...

Jennifer Garner steps out for coffee with a friend in Los Angeles... amid ex Ben Affleck's breakup   The 48-year-old actress rocked a yellow jacket while chatting as it was recently reported that Jen's 'picking up the...

My dad makes nasty comments about my Nigerian wife and gives her filthy looks   DEAR DEIDRE: I HAVE been married to an amazing woman for six years. We are really happy together. The only fly in the ointment is my dad. I am 28...

The Sun ~ 20:53 PM GMT January 23, 2021
● Zara McDermott flaunts her toned physique in a TINY blue bikini in throwback snap   The Love Island star, 24, flaunted her figure in a tiny blue bikini as she shared stunning throwback Instagram snaps of her previous trip to...

The Masked Singer UK: John Thomson is REVEALED as Bush Baby   The Coronation Street star, 51, was one of the first celebrities who the panel failed to guess ahead of his unmasking, after completely throwing viewers with a fake...

Dry January will fly by with these tasty alternatives to traditional alcoholic drinks   I AM not a great believer in Dry January. If you restrict something so much it makes you crave it! But cutting back your general boozing...

Kelly Gale shows off her diamond engagement ring as she steps out with fiance Joel Kinnaman   The two appeared to be enjoying each other's company as they calmly strolled together through the city streets, marking the first...