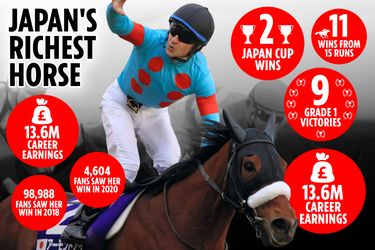 Image source : thesun.co.uk
ALMOND EYE retired as the highest-earning Japanese horse ever after a stunning victory in the Japan Cup. The legendary five-year-old earned owners just under £1million per race during a glittering career. Almond Eye won a total of £13.6m from 15 races – having triumphed in a record nine Grade 1 turf contests. Grade 1 is […] ▶ Full story on thesun.co.uk

Rio Ferdinand hails Bukayo Saka's 'maturity' and says teenager is an Arsenal leader   The England international has been a consistent performer during a troubling campaign for Mikel Arteta's side and is a key reason for...

No players inducted to baseball's Hall of Fame as Schilling and Bonds miss cut   * No player inducted to Hall for ninth time ever and first since 2013 * Schilling (71.1%), Bonds (60.7%) come closest to 75% thresholdThe baseball...

West Brom players have no excuses for Manchester City's second goal   CHRIS SUTTON: It's that old adage - play to the whistle. We're taught that at a young age, and West Bromwich Albion's defenders can have no...

'Nobody will arrive, nobody will leave' - Conte says 'shy' Eriksen will remain at Inter after Milan derby wonder goal   The Danish midfielder scored a stunning free kick to lead his side past rivals AC Milan in the Coppa Italia...

'Auba is having a difficult time' - Arteta dedicates Southampton win to missing Arsenal striker   The Gunners skipper was missing at St Mary’s, with the club putting his absence down to ongoing family reasons

Sports icon Mark Spitz shares his Olympic blueprint to save Tokyo Games   MARK SPITZ became a global icon when he won seven Olympic swimming gold medals – all in world-record time – at the 1972 Munich Games. The 70-year-old, who ...

'Cancelo has something different' - Gundogan applauds Manchester City team-mate as he impresses in new role   The German midfielder heaped praise on the defender after he scored a goal after providing an excellent assist on...

The Sun ~ 23:05 PM GMT January 26, 2021
● 11pm Chelsea transfer news LIVE: Thomas Tuchel CONFIRMED, Bellingham interest could see Rice deal shelved   THOMAS TUCHEL has been confirmed as the new Chelsea manager after Frank Lampard was sacked. And that could have big...

Jill Scott hoping Everton loan move can help her achieve double Olympic dream with Team GB   Scott has 149 caps for England and was part of the Team GB squad in 2012 but knows she will need to be playing regularly to have a...

Steve Bruce reflects on Newcastle's 2-1 defeat to Leeds   STEVE BRUCE claims Newcastle United’s second-half display against Leeds United has given them ‘something to build on’ – even though their 2-1 defeat means they have now...