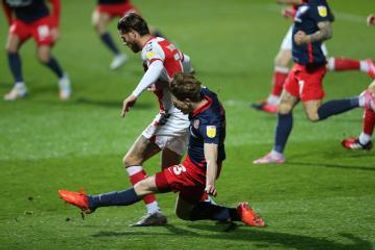 Image source : thenorthernecho.co.uk
HE might have been frustrated at his Sunderland’s side failure to hold on to a winning position in each of their last two matches, but Phil Parkinson says last night’s 1-1 draw at Fleetwood Town provided further evidence of the way in which the salary cap has levelled things up League One. ▶ Full story on thenorthernecho.co.uk

'Goodbye for now, not goodbye forever' - Ozil bids farewell to Arsenal fans after completing Fenerbahce move   The playmaker says his bond with the north London club is not over just because he has left after almost eight years

Kakamega Homeboyz see off Bidco United, KCB down struggling Western Stima   Six goals were scored and a clean sheet was recorded in the two matches that were played by the league sides

Glenn Hoddle backs James Maddison to win a place in England's Euro 2020 squad   The Leicester playmaker, who has so far only registered one cap for his country, scored against Chelsea in midweek and Hoddle believes the...

The strong Wales XV that won't be seen in the Six Nations   Wayne Pivac has made his calls for the tournament, but he's left out some quality players and there are some top performers who are on the sidelines because of...

As Jurgen Klopp shows worrying echoes of Dortmund downfall could we be watching beginning of the end at Liverpool?   THE ECHOES of Jurgen Klopp’s words and deeds in this time of crisis will be chilling to Liverpool fans. For he...

LIVE: Elche vs Barcelona   Stay right up to date with Goal's live commentary coverage of the biggest games from around the globe

Chelsea player ratings vs Luton: Tammy Abraham makes a statement as Kepa Arrizabalaga continues to struggle   Tammy Abraham scored a hat-trick to give Chelsea victory over Luton Town in the FA Cup and relieve some pressure on...

Playing with and coaching Ozil was a privilege says Arteta as midfielder makes long-awaited Arsenal departure   Despite leaving the midfielder out of his squad for the season, the Gunners coach was full of praise for the...

Tammy Abraham fires hat-trick to ease pressure on Frank Lampard   The England striker struck twice in the first-half before completing his treble late on in a 3-1 FA Cup win against Luton.

Mesut Ozil FINALLY completes his free transfer to Fenerbahce from Arsenal   The outcast playmaker, 32, sealed his return to homeland Turkey on Sunday and insisted the club's supporters would 'forever remain' in his...

Kariobangi Sharks 0-2 AFC Leopards: Rupia, Owiti on target for Ingwe at Kasarani   The loss is the second for William Muluya’s side who were defeated 4-2 by Tusker in their previous encounter

Five things we learned as Kaizer Chiefs dropped points against Stellenbosch FC   The Glamour Boys were held to a 0-0 draw by Stellies in a PSL match on Saturday. Here are five things that we learned from Amakhosi's...

BBC News ~ 14:24 PM GMT January 24, 2021
● 2.15pm Arsenal transfer news LIVE: Odegaard LATEST, Southampton loss reaction, Bertrand interest, Maty Ryan CONFIRMED   ARSENAL are OUT of the FA Cup after a limp 1-0 defeat to Southampton. And he could be followed by more...

Edu comments on Mesut Ozil's "professionalism" as he completes Arsenal exit   Mesut Ozil has left Arsenal and completed his Fenerbahce transfer with Edu and Mikel Arteta both sending positive farewell messages to the...

Mesut Ozil releases goodbye statement as Arsenal exit to Fenerbahce is confirmed   Mesut Ozil has sent a message to Arsenal supporters after leaving for Fenerbahce, thanking them for their support over the past seven-and-a-half...

Joe Root overtakes Boycott and Prior as the England batsman with MOST run outs in Test history   After also being victim of a run-out in the second-innings of last week's first Test win, Root has now been dismissed eight...

Chelsea's Abraham hits hat-trick against Luton but Werner frustration continues   The banner draped over the top tier of the Shed End served as a reminder that it will be a long time before Chelsea’s fans give up on Frank...