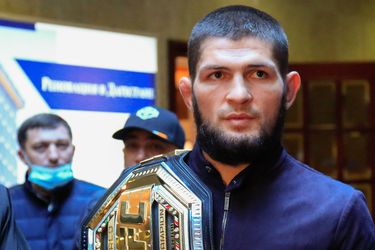 Image source : thesun.co.uk
KHABIB NURMAGOMEDOV has revealed he will host a press conference on Tuesday – sparking talk of a UFC comeback ALREADY. The undefeated Russian lightweight champion, 32, last fought in October as he beat Justin Gaethje at UFC 254. The MMA legend immediately announced his retirement in honour of his late father. But ever since, Khabib‘s […] ▶ Full story on thesun.co.uk

Training ground ploy pays off for Swans and the Rotherham improvement needed   Steve Cooper admits Swansea City need to improve at Rotherham after their draw with Brentford and has revealed the secrets behind Conor...

Thomas Tuchel admits Chelsea face a battle to make the top four this season   Tuchel had to settle for a point as his first game ended in a 0-0 draw. Chelsea languish in eighth but the new boss promised to work on the details...

Hibernian 0-1 Rangers: Steven Gerrard's side march on   MARK WILSON: Rangers roll onwards. Another test passed. Another game ticked off in this countdown towards a coronation that becomes ever more inevitable.

Gunnel Lindblom, Familiar Face in Bergman Films, Dies at 89   She appeared in early Ingmar Bergman classics like “The Seventh Seal,” “Wild Strawberries” and “The Virgin Spring” and devoted much of her long career to the stage.

The Alun Wyn Jones interview: We've taken the hurt but it had to be done   Wales' skipper says he is making good progress in his battle to be fit for the start of the Six Nations

Leone Nakarawa leaves Glasgow Warriors for Ulster Rugby   LEONE Nakarawa will leave Glasgow for Ulster in the summer, bringing to an end a deeply frustrating second spell with the Warriors.

Stuart Hogg hands Scotland boost ahead of England tie   STUART HOGG will play his first game in over a month for Exeter Chiefs away to Worcester Warriors on Saturday afternoon.

Gregor Townsend looks ahead to Scotland's Six Nations   TWICKENHAM has been the graveyard for an awful lot of Scottish rugby dreams during the 37 years since the national team last tasted victory there.

Mick McCarthy challenges Harry Wilson after dropping him after training   Eyebrows were raised when Mick McCarthy's first Cardiff City team was revealed, but the manager has said that two players stood out in training and...

Ruben Loftus-Cheek denied at death for Fulham in draw at Brighton   A slog in the south coast mist did not leave anyone’s prospects looking much clearer. The smart money at the outset had been on a stalemate between Brighton and ...

Tanzania 2-2 Guinea: Taifa Stars eliminated from Chan after draw with National Elephants   The West Africans will now play Rwanda in the quarter-finals as Zambia will square up to defending champions Morocco

Celtic 2 Hamilton 0: Champions correct their course, but still cut well adrift   A routine midweek victory over Hamilton may not have historically been much to get excited about for Celtic, but in a season that has been far from ...

Thomas Tuchel outlines his expectations to Chelsea players after draw vs Wolves   The new Chelsea boss saw his side fail to break down Wolves in his first match as a Premier League manager, but is emboldened about the challenge...

3 talking points as Alfredo Morelos blasts Rangers to victory   The Colombian showed both sides of his footballing character as his side battled to a crucial three points in Edinburgh.

3 talking points as Celtic get back to winning ways against Hamilton   The strike pairing were at their best in a comfortable 2-0 win over Hamilton at Parkhead.