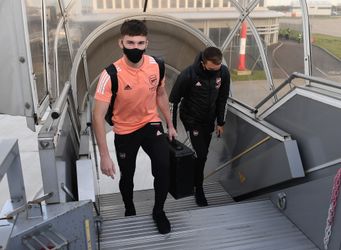 Image source : thesun.co.uk
ARSENAL were forced to spend a third night in Norway after their flight back to England was cancelled due to fog in the UK. The Gunners were due to return back to London immediately after their 3-0 win against Molde that secured their passage into the Europa League Round of 32. Mikel Arteta‘s side arrived […] ▶ Full story on thesun.co.uk

'That's why I'm not a manager!' - Gary Neville reveals how he differs from brother Phil in wake of Miami hiring   The younger Neville brother explained why he believes that David Beckham's side made the right hire

Kerala Blasters keeping it simple after disappointing start to the season   Kerala Blasters are 10th on the league table and a change in approach is a welcome move...

Pierre-Emerick Aubameyang missed out on hat-trick because of call of nature   The Gunners striker was forced to make a dash to the dressing room after being substituted two minutes after his second goal.

Wales are considering a shock recall of Bath No 10 Rhys Priestland for the Six Nations   Rhys Priestland has not played a Test since 2017 as he did not meet the 60-cap quota for players who play outside Wales. However, an...

Talking Horses: Royal Ascot may need to embrace change in troubled times   The event is adding a seventh race to its daily card but with racing’s future so uncertain, more ambition would be welcome There might be a crusty...

Are you a Manchester City fan? An opportunity of your dreams awaits you!   In association with Man City and TECNO Mobiles, Goal brings an exciting stint for the fans to get to know their club from close quarters...

David Alaba agrees to join Real Madrid on four-year contract this summer   * Defender turns down approaches from Liverpool and PSG * Mario Mandzukic set to return to Europe with MilanDavid Alaba has reached an agreement to join...

Emile Smith Rowe says Arsenal striker Alexandre Lacazette 'helped me so much' on and off the pitch   In-form Emile Smith Rowe produced his fifth assist of the season to set up Bukayo Saka for the Gunners' second goal as they ...

Emile Smith Rowe 'could play in the old Arsenal teams', insists Gary Neville after Newcastle display   The 20-year-old was one of Arsenal's best performers in the convincing 3-0 victory at the Emirates as he as laid on an...

Steve Bruce says he is '100 per cent' the man to keep Newcastle United in the Premier League   Newcastle have collected two points from a possible 21 and have scored one goal in 11-and-a-half hours in all competitions...

'Now there are two of us to scare opponents!' - Ibrahimovic thrilled with AC Milan's Mandzukic move   The Swedish star is looking forward to linking up with his new team-mate

How happy have you been with Steve Bruce as Newcastle United manager?   Take part in our special manager survey to have your say

Watch Zlatan Ibrahimovic roll back the years with double as ten-man AC Milan beat Cagliari   ZLATAN IBRAHIMOVIC came back with a bang to fire AC Milan three points clear atop Serie A. After six weeks out with a thigh injury, the ...

The Premier League is set to introduce two concussion substitutions    Top-flight sides are expected to vote through trials at a meeting on Wednesday which would permit each club to make an additional two changes per game.

How Manchester City turned from noisy neighbours to silent assassins   City have been so quietly efficient of late that it has been easy to miss them coming up on the rails in a fascinating title race - and that's how Pep...