How old is Tom Kerridge and how much weight did he lose? 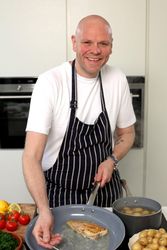 Image source : thesun.co.uk
TOM Kerridge is a chef known across the globe for his British, French and fusion dishes. He’s now back on TV with his BBC show called Saving Britain’s pubs. Who is Tom Kerridge? Tom Kerridge was born in Salisbury, Wiltshire, on July 27, 1973. He was originally a child actor but decided to attend culinary […] ▶ Full story on thesun.co.uk

Daisy Lowe showcases her incredible curves in chic swimwear   The model, 31, looked effortlessly stylish in her black two-piece as she shared her positive thoughts over the third lockdown and reminisced over previous days spent...

Armie Hammer hints he may have been fired from Gossip Girl in recently resurfaced 2017 WWHL clip   Armie Hammer has been in the headlines since allegations of his wild partying ways and cannibalistic kinks emerged after a lurid...

Irina Shayk and Bella Hadid are vintage chic in stunning images from Moschino Spring 2021 campaign     The runway superstars sport beehive hairdos and are transformed into marionettes, with strings attached to their lithe limbs, ...

One Direction: Zayn Malik's new album drops off top 100 in latest chart update   ONE DIRECTION star Zayn Malik released his third solo album last week, kicking off the year with a highly-anticipated album - but it has not...

Michelle Williams makes a unique fashion statement in white slacks and white clogs   Michelle Williams, 40, was spotted out in New York City rocking some white nurses clogs in a unique ensemble on Monday.

Young pictures of Bernie Sanders: What did the US Senator look like growing up?   VERMONT Senator Bernie Sanders has become a topic of discussion again following his iconic (and meme-able) mittens outfit at President Joe Biden’s ...

Jade Roper and Tanner Tolbert celebrate their fifth anniversary: 'Cheers to choosing each other'   On Sunday, the 34-year-old Bachelor In Paradise contestant made a post to her Instagram account to commemorate her fifth...

Jerry Seinfeld sets record straight on THAT awkward Larry King interview after host died aged 87   The 66-year-old comedian took to Twitter on Saturday to share his thoughts about the television personality with his 4.3million..

13 Nintendo Switch games on sale for just 8p each at the official online eShop   Games include puzzle, board and side scrolling platform runners.

Dakota Johnson reveals she will likely be in therapy for the rest of her life   'I've been so lucky to be surrounded by people who have really encouraged me to go deeper into myself,' Dakota, 31, said on The Drew...

Alan Carr, Marco Pierre White and Jamie Redknapp join forces as they film A League Of Their Own   The famous faces appeared to be enjoying a rare day out amid the pandemic, at Weymouth in Dorset on Monday.

Bling Empire episode 2 & 3 recap: No, you can't have her placenta...   Investigating the Mystery French Man™ Guy Tang in episode 3 of Bling Empire A series in which we digest the dramatic arcs and standout moments in each...

Mollie King flaunts taut midriff in a navy crop top and leggings while working out at home   The former Saturdays singer, 33, exuded beauty as she beamed for a workout selfie after her exercise session at home and flashed her...

The Guardian ~ 18:57 PM GMT January 25, 2021
● Hancock: 'Difficult to put timeline on exiting lockdown'   The health secretary says lifting restrictions can only happen when the "facts on the ground" show it is safe.

Your Complete Guide to the Best Nail Shapes in the Game   Goodbye "squoval," hello "ballerina."

Fate: The Winx Saga Is Polarizing Netflix Users   It's described as a mix of Riverdale and Harry Potter.

Bridgerton's Regé-Jean Page rocks purple hair as he jams on stage with teenage band   The actor, 31, commanded attention as he put on a show for packed audiences in Camden, London, while being the group's lead singer back in ...

90 Day Fiance to follow the dating lives of six former castmembers in The Single Life spinoff   The show will follow six castmembers who are back on the dating scene after heartbreak on one of the other 90 Day series.