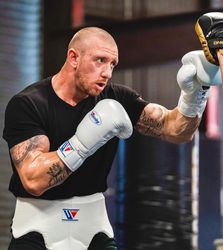 Image source : thesun.co.uk
BLAKE McKERNAN is the ex-army machine gunner and Iraq veteran turned undefeated cruiserweight boxer. And he faces the toughest test in his 13-fight career on Saturday, facing former two-weight champion Badou Jack. McKernan does so on Mike Tyson’s undercard – the man who he named his son after and first inspired him to box. The […] ▶ Full story on thesun.co.uk

Chelsea's Antonio Rudiger 'clashed with Cesar Azpilicueta on more than one occasion'   Frank Lampard was dramatically sacked by the Blues on Monday after an alarming run of form has left them ninth and it has now been reported...

Chelsea set to replace Frank Lampard with former PSG boss Thomas Tuchel   Lampard’s status as the club’s record goalscorer and fan favourite could not save him from becoming Roman Abramovich’s 10th managerial sacking.

Chan 2021 Wrap: DR Congo & Congo seal quarter-final berths after wins over Niger and Libya   The Leopards will play Cameroon in the last eight while the Red Devils will entertain Mali

Bruno Fernandes reveals he learned free-kick technique that defeated Liverpool from Juan Mata   The Portuguese star fired home from just outside the box to settle a classic FA Cup fourth round tie in United's favour on...

Kaizer Chiefs vs Baroka FC Preview: Kick-off time, TV channel, squad news   This is an interesting encounter as Amakhosi face a team that ultimately prevented them from winning the league title last season

Orlando Pirates vs TS Galaxy Preview: Kick-off time, TV channel, squad news   It is the first time for the Buccaneers to face their opponents from Mpumalanga, who bought the PSL status of Highlands Park

Goal.com ~ 07:01 AM GMT January 26, 2021
● Gerry Thornley on matches without fans; Lampard afforded very little time   The Morning Sports Briefing: Keep ahead of the game with ‘The Irish Times’ sports team

Is Thomas Tuchel the right man to replace sacked Frank Lampard at Chelsea? - Big Debate   A new edition of Express Sport Big Debate sees our writers offer their opinion on whether or not Chelsea are right to replace the sacked...

Ole Gunnar Solksjaer shows what can be done, says Bolton boss after Frank Lampard sacking   OLE Gunnar Solksjaer's transformation at Manchester United is a shining example of why football managers should be afforded more...

LeBron shoots 46 vs Cavs; Curry downs Timberwolves   LeBron James put on a show as the four-time MVP scored 46 points to overcome the Cleveland Cavaliers as the Los Angeles Lakers moved to 14-4 for the season.

Charlie Nicholas urges Celtic to 'write off' season and sell Odsonne Edouard   The legendary Hoops striker reckons it's all over bar the shouting this term and his old side should focus on transfer moves to fund next...

Nizar Khalfan: Yanga SC pick ex-player to replace Mwambusi as assistant   The Jangwani giants have picked their ex-player to assist Cedric Kaze as they strive to win the Mainland league title

Goal.com ~ 06:53 AM GMT January 26, 2021
● Rio Ferdinand describes Frank Lampard's Chelsea sacking as 'brutal' and a 'knee-jerk reaction'   Though unsurprised by the sacking given the turnover of managers at Stamford Bridge, Ferdinand believes Lampard's status as a...

Kaizer Chiefs defender Frosler: I just need to build the confidence up again   In his absence, the likes of Siyabonga Ngezana, Kgotso Moleko and Ramahlwe Mphahlele have all deputised at full-back

Maguire opens up on first time Solskjaer gave him Man Utd captaincy   Manchester United skipper Harry Maguire was made captain of the Red Devils by Ole Gunnar Solskjaer after he forked out a world-record fee on the England...

Manchester United might be about to make their true title advantage count   Man Utd face a pivotal month in the Premier League and they have a key advantage over most of their title challengers.

Messi to PSG update given by Barcelona boss Koeman as Neymar barb thrown   Paris Saint-Germain have made no secret over their hopes of signing Lionel Messi at the end of the season and Ronald Koeman has responded by demanding...

Evening Standard ~ 06:18 AM GMT January 26, 2021
● Dear Kobe: A tribute to Kobe Bryant one year after his tragic death   A year on from the tragic death of Kobe Bryant, BBC Sport’s Liam Loftus dedicates a poem to the NBA legend as he reflects on the career and moments that made...