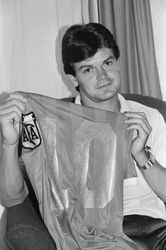 Image source : thesun.co.uk
ENGLAND’S dressing room was raging after Diego Maradona had knocked them out of the World Cup in Mexico. The air was blue and the FA officials were being told to go to Fifa and demand a replay because of Maradona’s 1986 ‘Hand of God’ goal.  It was not just the Argentinian cheat who was the […] ▶ Full story on thesun.co.uk

West Ham 'are looking to offer David Moyes a new deal' after the team's strong start to the season   Moyes kept the Hammers up last season and they have since gone from strength to strength and now sit seventh, just two points...

Cristiano Ronaldo rejects £5.3million-a-year offer to become the face of Saudi Arabian tourism   The deal stipulated that Ronaldo's face should be on all promotional material and that he would have to make visits to the...

Kylian Mbappe says he is still 'thinking about' signing a new contract at PSG   Mbappe has Real Madrid and Liverpool among the interested parties but the 22-year-old - now in the last 18 months of his current deal - admits he is ...

Nuno demands Wolves improve 'a lot of aspects of our game' following slender win against Chorley   A stunning first-half goal from Vitinha proved the only difference as the National League North side were edged out 1-0 by their...

'Always the same mistakes' - Reus says Dortmund's defending 'stinks' as BVB lose ground on Bayern in Bundesliga title race   Two goals from Erling Haaland counted for nothing as Edin Terzic's side were beaten 4-2 by Borussia ...

Christian Benteke on the way out at Crystal Palace with West Brom interested in Belgian striker   The striker has had a torrid time during his almost five years at Palace, scoring just 24 goals in 120 Premier League appearances...

Talking Horses: back-to-form Defi can run down Politologue at Ascot   Philip Hobbs’s stable star is said to be impressing in his home work and can end fine run of the flying grey Politologue There have been a couple of rocky...

LaLiga Weekend Preview: Alaves vs Real, Elche vs Barca   The second half of the 2020/21 LaLiga Santander season begins this weekend

Mat Ryan seals 'surreal' loan move to Arsenal   * Australian international loaned to Arsenal from Brighton and Hove Albion until the end of the season * Goalkeeper signed as competition for Bernd Leno after losing his starting...

Eddie Jones demands that England become 'an impossible side to play against' in the Six Nations   Despite being limited to choosing 28 players in the main group for the championship, Jones has called up these exciting rookies,...

Legendary hardman Mick Harford shows his softer side as old clubs Chelsea and Luton prepare to slug it out in FA Cup   MICK HARFORD hates being caricatured as a hardman. And at Luton Town, they appreciate the gentler side of the ...

RFU to scrap Premiership relegation this season due to Covid-19 havoc and the fear of clubs suing   EXCLUSIVE BY MATT HUGHES AND WILL KELLEHER: As a result of the move, the 2021-22 Premiership campaign is set to feature 13...

The Sun ~ 22:54 PM GMT January 22, 2021
● Southampton vs Arsenal FREE: Live stream, TV channel, team news and kick-off time for FA Cup fourth round match   ARSENAL take on fellow Premier League side Southampton in the fourth round of the FA Cup. The Gunners beat...

Szczesny: Juventus showed how hungry for trophies we are with Supercoppa Italiana win   The former Arsenal goalkeeper helped his side to their first piece of silverware under Andrea Pirlo with a 1-0 win over Napoli

NASSER HUSSAIN: Angelo Mathews' heavenly hundred proves the boost you can get against familiar foes   NASSER HUSSAIN: When you have done well against a nation, they respect you. His Test batting average of 50 against England is...

Micah Richards' new documentary provides an insight into why bigotry so often goes unchallenged   Gary Neville provides testimony which grabs the subject of racism in football by the scruff of the neck and demands that the sport ...