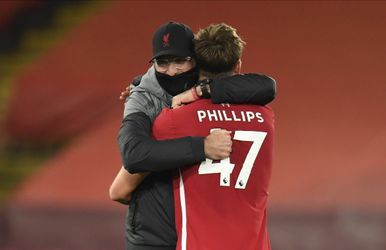 Image source : thesun.co.uk
JURGEN KLOPP heaped praise on Nat Phillips following his impressive Premier League debut in the win over West Ham. The Anfield reserves ace was filling in for injured Virgil van Dijk with Klopp’s team caught in the midst of a defensive shortage due to injuries.  Phillips, 23, was drafted into the title-holders’ back-four with the […]
▶ Full story on thesun.co.uk

Jamie Carragher and furious Dean Smith SAVAGE decision not to award Aston Villa late penalty   The incident, which once again raises further questions over the use of the much-maligned VAR, came when Ollie Watkins held off...

The Irish Times ~ 01:00 AM GMT December 01, 2020
● Christie finds some Ballymun in Tipperary football   Former Dublin star, now aiding the Premier cause, believes Munster breakthrough can be a turning point in the county’s football story

Jack Grealish calls to 'get rid' of VAR after Aston Villa suffer defeat to West Ham   The Villains attempted to muster a fightback after Jarrod Bowen put the hosts ahead at the start of the second half with a deft header but...

Jurgen Klopp 'doesn't have a point about fatigue, or Saturday kick offs', insists Gary Neville   A furious Klopp engaged in a war of words with BT Sport reporter Des Kelly after their 1-1 draw at Brighton on Saturday as he once...

'It's just not worth it': Australian NBA trailblazer Andrew Bogut retires from basketball   * Veteran centre will not return to NBL next season * His body has been ‘hanging by a thread’ since 2018Australian basketball great...

Talking Horses: BHA stands by injury return protocols after Cook admission   Danny Cook fell three times in 16 rides and then admitted his vision has not recovered from an injury sustained last month Racing’s rulers have stood...

Football must use concussion substitutes to allow players to be properly assessed, warns expert   Dr Stewart, who is leading the FIELD study into the link between dementia and football, says rugby-style temporary concussion...

Lennon set to take charge in Milan with Celtic powerbroker Desmond resisting calls to sack him   Neil Lennon's future will be discussed over the next 48 hours - but there is every chance the embattled Celtic manager will...

'Kane and Son are the best partnership in the world' - Defoe credits 'unbelievable' Mourinho for Spurs pair's success   The Tottenham duo are on their way to becoming the Premier League's most prolific pair ever and have...

West Ham match-winner Jarrod Bowen can ease Michail Antonio burden as Said Benrahma makes his mark   West Ham had to ride their luck at times on Monday evening, but after a couple of seasons during which it did not feel like...