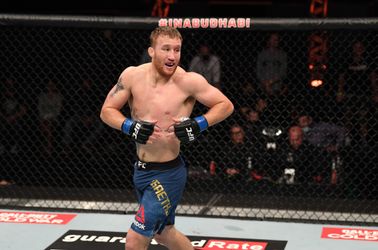 Image source : thesun.co.uk
JUSTIN GAETHJE will once again fight for lightweight supremacy after Khabib Nurmagomedov’s retirement – so who will he face? A second-round submission defeat to the Russian ended the American’s stint at UFC interim champion. But Khabib’s shock decision to announce his retirement, effective immediately, means the championship belt is back in sight. Who Gaethje would […]
▶ Full story on thesun.co.uk

● Canadian PM Justin Trudeau is the next victim of pranksters pretending to be Greta Thunberg
The Sun   - 19:15 PM GMT November 25, 2020

Troy Deeney insists Edinson Cavani deserves MORE than a three-game ban   Cavani's heroics for United at Southampton were overshadowed when he posted a controversial Spanish term on social media and Deeney thinks he should be ...

Mail Online ~ 13:06 PM GMT November 30, 2020
● Lennox Lewis: 'I knew I would meet Mike Tyson in the ring'   The former world heavyweight champion reflects on his east London early years, sparring Tyson as a teenager, and meeting his heroes Nelson Mandela and Muhammad Ali “It ...

Arsenal next manager odds: Allegri, Tuchel, Vieira and Henry among candidates to replace Arteta after huge price shift   MASSIMILIANO ALLEGRI has been installed as favourite to be appointed the next manager of Arsenal. That’s...

Bolton's Christmas position could turn heads ahead of January window, says Doyle   The Trotters have won their last five games in all competitions and are on the cusp of the League Two play-offs

F1 authorities investigating horrifying Grosjean crash   Formula 1's authorities have started their investigations into Romain Grosjean's violent accident in the Bahrain GP, with Ross Brawn saying there were "a...

Joan Laporta will re-stand for Barcelona election and wants Lionel Messi and Pep Guardiola   Joan Laporta promised if he won the elections he would sit down with Messi and try to persuade him to stay, although he admitted a plan ...

Steven Gerrard says Glenn Middleton could still have a chance at Rangers.   The youngster was handed a rare runout in the romp over Falkirk and that may not be the end to his contribution.

Daily Express ~ 12:33 PM GMT November 30, 2020
● John Barnes claims Liverpool were RIGHT to sign Diogo Jota over Timo Werner   Jota has been an inspiration since he joined Anfield this summer having netted nine goals so far, chipping in with some important goals in the absence ...

'28 seconds to live' - World reaction to Grosjean miracle   Romain Grosjean walked away from one of Formula 1's most horrifying accidents in decades at the Bahrain GP, and Monday's papers - from around Europe - have...

Awoniyi: Nigeria forward wants to quit Liverpool after seven loan stints   The 23-year-old striker moved to Anfield in 2015 but he is yet to play a match since his arrival

How a cancelled flight and fluke meeting at NBA game paved way for richest fight ever between Mayweather and Pacquiao   AFTER five years of long drawn out negotiations – Floyd Mayweather and Manny Pacquiao finally sealed a deal...

Romain Grosjean out of Sakhir Grand Prix as he recovers from fireball crash   Haas reserve driver Pietro Fittipaldi, the grandson of double world champion Emerson, will make his F1 debut in next weekend’s race

Liverpool to resurrect Anfield stadium plans with 7,000-seat expansion   The Reds plan to increase Anfield's capacity to 61,000 seats with a major redevelopment of the Anfield Road stand in time for the start of either the...