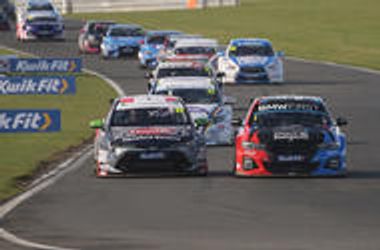 Image source : autocar.co.uk
Northern Irish Team BMW driver outdrove rivals Tom Ingram and Jake Hill twice last weekend Team BMW  driver Colin Turkington enjoyed one of the best weekends of his illustrious BTCC career as a double victory at Snetterton vaulted him back to the summit of the standings. The Northern Irishman grabbed pole position in the all-new ‘Top Ten Showdown’ on Saturday afternoon and duly converted that into two commanding wins on race day. Turkington followed that up with a podium in the final bout as Rory Butcher and Tom Ingram clashed, impacting on their respective championship challenges. Motorbase Performance’s Ollie Jackson grabbed a second career BTCC victory in the reverse-grid race, following on from his maiden success at Silverstone last month. The morning action commenced with Turkington securing a lights-to-flag victory despite the early attentions ofToyota Gazoo Racing UK rival Ingram. Turkington’s 3 Series blasted away from the line with what looked to be one of the best launche
▶ Full story on autocar.co.uk

Kate Moss, 46, shows off her age-defying beauty in stunning Vogue cover shoot   The iconic model, 46, looked resplendent as she modelled in stunning snaps for the publication, which saw her pose for not one but two special...

Mail Online ~ 19:12 PM GMT November 30, 2020
● Demi Rose showcases her ample assets and tiny waist in pink string bikini   Demi Rose put on a typically eye-popping display as she posed in a string bikini in an Instagram video on Monday.

27 Romantic Christmas Movies to Watch Under the Mistletoe   Netflix and chill, am I right?

What time is The Undoing on Sky Atlantic?   THE Undoing is a psychological thriller about a woman whose world starts to fall apart when her husband goes missing. Nicole Kidman and Hugh Grant take the lead in this tense drama...

Empire of Sin release date news and first review scores   EMPIRE of Sin is launching across a number of big platforms this week, with the first reviews worth reading today.

Cyber Monday laptop deals: HP Pavilion, Dell XPS, Microsoft Surface and Lenovo ThinkPad laptops all on sale - CNET   Cyber Monday is here and there's no better time to get a deal on a new laptop.

PS5 restock on Cyber Monday: Check inventory at GameStop, Best Buy, Walmart, Amazon and Target - CNET   We're tracking all the latest PS5 retailers' restocks. Keep checking back for the latest updates on where to get...

Mail Online ~ 18:40 PM GMT November 30, 2020
● Gisele Bundchen basks in the glow of the full moon while wearing a bikini on the beach   The 40-year-old supermodel looked every inch the stunner as she showed off her killer frame while basking in the glow of the powerful moon.

Exclusive interview with YouTuber Ashlynne Eaton on minimalism, simplifying and Christmas   Ashlynne Eaton kindly spent some time with Female First to discuss her YouTube channel and how she found minimalism.

Mysterious monolith puzzle may have been solved by internet sleuths - CNET   It's probably not aliens. Debate continues on whether it's a McCracken.

Nicole Williams wears a matching sports top and shorts as she leaves a hotel in Los Angeles   Nicole Williams is able to turn any sidewalk into a runway. The 34-year-old supermodel was seen leaving a high-end hotel on the...