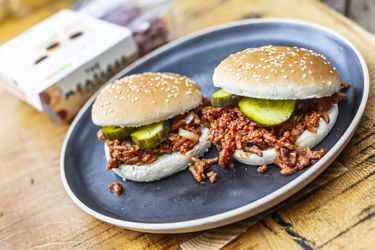 Image source : thesun.co.uk
VEGGIE burgers and vegan sausages could be banned by Brussels. The EU Parliament is voting on rules to bar meat-inspired names. Burgers could become “veggie discs” and sausages “vegan tubes”. Critics called it a waste of time and money. But it is supported by the meat industry. Nick Allen, of the British Meat Processors Association […]
▶ Full story on thesun.co.uk

● Massachusetts May Become First State To Ban Police Use Of Facial Recognition
Forbes.com   - 01:29 AM GMT December 02, 2020

● Britons SPLIT over whether to BAN those who refuse vaccine from bars and restaurants -poll
Daily Express   - 21:10 PM GMT December 01, 2020

Slack: What The $27.7 Billion Deal Means For The Cloud And Salesforce.com   The deal actually highlights some of the weaknesses in both companies.

Sean Wilson: Freed thug who choked own mother jailed for eight years   Police were determined to charge “dangerous” Wilson for the “awful” attack

The first snow of winter: Stunning images show wintry scenes in countryside   Pictures capture snow covering the hills around Weardale as the Met Office issued two weather warnings for snow in parts of the North East

The renaissance of Scott Baldwin, the Welsh hooker tearing it up in England   Baldwin left Welsh rugby in early 2019 but is now ineligible to play for Wales due to the 60-cap rule, despite not receiving an offer from a region

'We have an Irish guy in the White House!' O'Leary overjoyed with Biden after major deal   RYANAIR CEO Michael O'Leary admitted his optimism for customers and the aviation industry with Joe Biden as US President.

Supermarket top brass are right: business rates need urgent reform   Successive governments have offered tweaks, none cut to the heart of problem: growth of online retail Amazing, isn’t it? All those supermarkets, it turns out,...

Lloyds reintroduces 10% deposit mortgages for first-time buyers   Loans of up to £500,000 are available on deal from Lloyds and Halifax but new-build properties are excluded The UK’s biggest mortgage lender is reintroducing 10%...

Facebook to ban anti-vaccination conspiracy theories including 'microchip' lies   From believing Bill Gates wants to insert microchips into you to claiming the vaccine is an attempt to depopulate the world, mad conspiracy...

Liverpool Echo ~ 19:19 PM GMT December 03, 2020
● Covid-19 vaccines: Questions about the unknown   What we know and don’t know about how vaccination in Ireland will work

Brexit talks COLLAPSE after Barnier tabled new demands -Macron threat sparks major setback   THE Brexit trade and security talks have taken a turn for the worse with the UK side warning fresh EU demands have caused a major...

Labour could win back 'red wall' seats it lost to Tories, poll suggests   The poll, which shows a reverse in the position from last year's general election, suggests the Tories are struggling to hold onto the support they...

Pound hits year high against dollar as Brexit trade deal hopes grow   With agreement thought to be close, FTSE 100 closes at highest level in six months Increasing hopes that an eleventh-hour trade deal will be agreed between...

'High-value' business travellers to be exempt from quarantine in England   From Saturday some performing arts professionals, TV staff and elite sportspersons will also be exempt * Coronavirus – latest updates * See all our...

Scots care home closed after more than 40 cases of Covid-19 detected   NHS Grampian announced a total of 44 cases have been recorded among staff and residents.

Facebook vows to tackle vaccine misinformation on its platform   Facebook will also be investing $100 million (€82m) in the news industry and supporting fact-checkers.