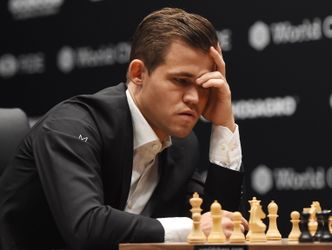 Image source : thesun.co.uk
CHESS grandmaster Magnus Carlsen has been showing off his tactical nous away from the board recently – with a starring run in fantasy football. A 75-point haul ahead of the final match in gameweek 16 put the globe’s top chess player at sixth in the Premier League’s official fantasy leaderboard. Over seven million players are […]
▶ Full story on thesun.co.uk

● We Asked Every Premier League Club What They Would Do If a Player Walked Off After Being Racially Abused
VICE   - 13:02 PM GMT February 20, 2020

The Sun ~ 07:11 AM GMT February 21, 2020
● 7am Man Utd news LIVE: Romero blunder, Ighalo and Fernandes feature, Rashford may miss Euros   OLE GUNNAR SOLSKJAER’S Man Utd were held to a 1-1 draw in Bruges, leaving them with work still to be done to progress to the last 16...

Who are the most direct teams in the Scottish Premiership - the sides with the most long passes ranked   'Long-ball merchants'. It is something which fans tease opposition supporters with.

Eric Abidal admits he shouldn't air Barcelona's problems publicly after Lionel Messi row   Barcelona sporting director Eric Abidal has conceded he was wrong to air his grievances with the squad in public after his...

Hamilton Accies hero Simon Mensing lifts the lid on ill-fated Motherwell spell   The midfielder, who is now a coach at Caledonian Braves, was signed by Maurice Malpas in 2007 by quickly crossed the Lanarkshire divide.

Express & Star ~ 07:00 AM GMT February 21, 2020
● Walsall vs Port Vale preview   Saddlers defender Dan Scarr believes the team’s hard work at the back will stand them in good stead as they prepare to welcome Port Vale to the Banks’s tomorrow.

Fury-Wilder banned from weigh-in face-off   Tyson Fury and Deontay Wilder have been banned from having a face-off at the weigh-in for their rematch in Las Vegas after clashing at a press conference on Wednesday.

Number 18: The National Hunt icon who has notched up four memorable victories at Cheltenham   WITH the Cheltenham Festival now 18 days away, the Sun Racing team will be bringing you their ‘Festival 50’ every day between now and...

Motherwell defender Liam Grimshaw targets European football next term - if he can earn new deal   The former Manchester United youngster has just became a centurion at Fir Park after turning out in the claret and amber 100 times.

Juan Mata singles out Man Utd team-mate for high praise after Club Brugge draw   Manchester United midfielder Juan Mata has singled out one of his team-mates for special praise despite drawing with Club Brugge.

Man Utd ace Andreas Pereira told he will 'only be a squad player' at the club   Manchester United were less than impressive in their 1-1 draw with Club Brugge in the Europa League but have the away goal advantage for the second...

Aaron Ramsey to play key role in Paul Pogba's Man Utd to Juventus transfer   Juventus look set to step up their interest in Paul Pogba in the summer and could use Aaron Ramsey as a makeweight in any deal to sign the Man Utd...

Timo Werner issued warning by RB Leipzig boss after dropping Liverpool transfer hint   RB Leipzig striker Timo Werner has been warned by his manager after he commented on the transfer speculation linking him with a summer move...

Scottish Rugby hopeful new VR technology could give them an extra edge   TECHNOLOGY within sport is moving at a rapid pace.

Liverpool touted to sign Jack Grealish over Man Utd because of the Champions League   Jack Grealish could leave Aston Villa this summer and Manchester United are touted as the favourites to make the transfer but should Liverpool ...